When the survey by CIPD was conducted in 2003, the percentage of 3.9 was noticed on the sickness absence of staff missed form the working time. And this survey was carried in 1,330 organizations including public and private sectors which means that every year employees are absent for 9 days. In the previous year, the percentage was bit higher, 4.4 percent in the previous year.

This pattern of absence is noticed in higher ratio generally in larger organizations and that’s why one can say that figures in CIPD surveys are higher than that of CBI as it involves larger organizations. In terms of absence, public sector organizations are higher than that of private sectors. In addition to public sectors, the ratio was noticed higher in women, staff on full time basis and employees under the age of 30. Such a ratio of absence is also dependent on factors like group of occupation, professional from admin department, managers and those suffering from lower level as compared to other groups. As noticed as CBI, the absence in sickness is highly noticeable in workers who are manual which also reflects the demand of the job’s nature. CIPD in 2003 stated that these levels of absence were highly noticed in the areas of food, tobacco and drinks industries. On the other hand, the sickness absence rate was lowest in the industries like legal, property services, publishing, media, consultancy and IT services.

If we talk about the economy of UK, the report by CBI states that every year it cost around 11 billion Euros which concludes that government of UK at national level works on decreasing the sickness absence and employment loss from organizations. 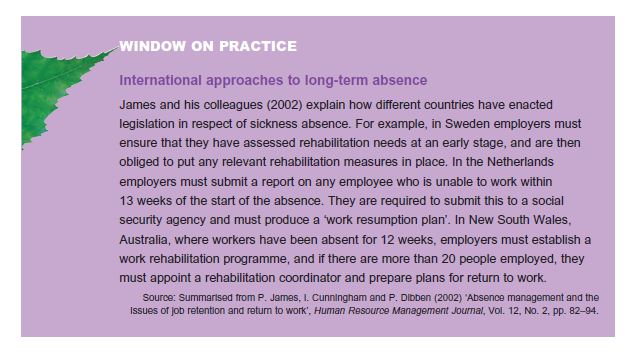