Now that you have learned about long term accruals, you now need to learn about undoing short term accruals. To keep a business running, companies must accumulate money in cash registers, in inventories and accounts receivable. These are known as current assets. Our learning will be based on current assets minus liabilities which gives us the net working capital or just working capital in short.

Therefore, you can calculate the Net Working Capital from the above with the help of the formula:

Let’s take an example. Say a firm sells $100 worth of good every year, but on credit. The accountants already record the $100 into the net income table as well as accounts receivable. Thus to get the actual cash flow, the values needs to be subtracted.  If we consider a scenario where the company continues to sell for credit for multiple years and the customers pay the sum next year of purchase. To get the cash flow for year one, the above procedure is followed. But if you need to find similar information for years 2 or 3 then you need to take a different approach. The accounts receivable account which previously had $100 increased to $300. To get the actual cash flow, you need to subtract the change in account receivable which is $200 from net income which is $300 to get the actual value of $100. Interestingly, if one the third year, the company is liquidated, then there is no net income. Then the change in working capital is -$300 and when subtracted from net income of $0 provides a positive cash flow of $300 indicating conversion of accounts receivable into cash. You can take a look at the calculations provided in the following table:

Short term accruals can be deferred at times. Like income tax is paid on the income statement for the year where certain earnings have been made. But the payment is not needed to be made right away, the firms generally wait till the end of financial year at April 15. These delayed taxes allow more accumulation of cash than indicated by net income. Thus it is recorded in actual cash flow statements as cash inflow. At some point in the future these taxes will have to be paid and it will indicate as a cash outflow for the firm.

Key note: in short term accrual operations the primary function is to subtract the changes in the working capital.

Most entrepreneur ventures fail due to lack of net working capital management. One reason for failure might be due to bad business idea. The second reason might be that the business idea was so good that the entrepreneur failed to cope with the success. Too much demand can engage the cash in inventories or production and the entrepreneur might fail to return the cash to bank for loan repayment. Thus working capital management is of prime importance for success of any business.

You need to be aware of the sign conventions in cash flow statements or you might get confused when provided with one. The convention is that accounts receivable and inventory, which are considered as positive cash flow, is provided negative sign. But interestingly, the accounts payable which are liabilities are not provided an opposite sign but instead left as it is which is negative. Thus, in order to calculate working capital, liabilities are not subtracted from current assets, but they are added together. Here is an example: 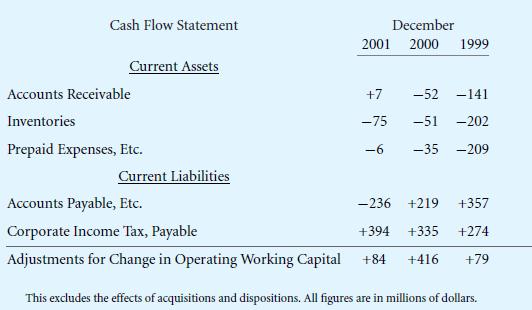 Thus as you can see, to calculate the change in working capital, they are added together. Because these numbers have been excluded from the effects of dispositions or acquisitions, they cannot be inferred from other parts of the financial statement.

The formula for project cash flow can now be expanded to include working capital: 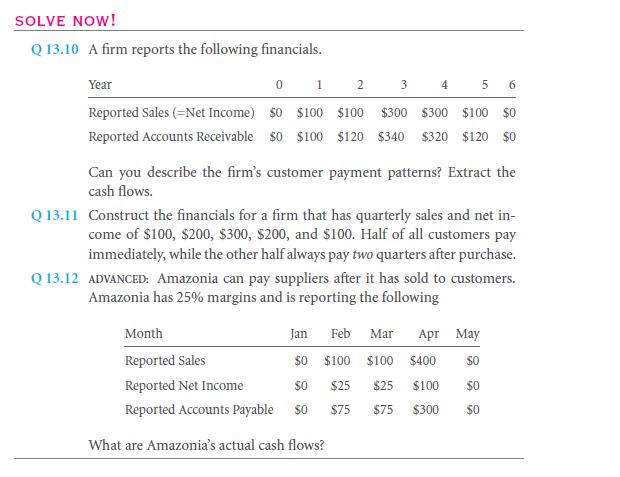