It is not unknown to you that every firm has its value evaluated through its projects. Projects contain cash flows which are necessary for NPV analysis. But accounting financials doesn’t have sufficient cash flow necessary for NPV analysis. Hence the need to understand financial statements becomes even more important. Here are some benefits you can gain by understanding financial statements.

This leads us to the question- why are the corporate companies not willing to incorporate the optional costs in their financial statement? They have already disclosed the details in their financial statement from where investors can easily calculate the optional costs and hence find out the true income of the company. Then what can be the motive behind doing so? Most financial researchers have come to the conclusion that the companies treat the market as inefficient in financial accounting. The market values a company on their finance management and are not able to detect even the most simplest of mechanical accounting loop holes.

Even though it is a very controversial thing to assume, if the market is truly blind to financial accounting then it could lead to a lot of consequences. Most significant impact will be on the share values based on NPV. With the possibility that managers can manipulate their earnings within their legal boundaries, NPV now seems insignificant.  The share price is also greatly affected as a company can increase its income in finance statements to price its share higher when it wishes to sell its shares. And there is evidence that indeed managers manipulate finance statements to increase earnings just before equity.

What can seem more troublesome is the fact that companies can choose to not undertake projects that have positive NPV if the project can reduce the overall income statement of the company. In a research conducted, it has been seen that almost 55% of companies, delay their project starting and over 80% refrain from maintaining the project. Although it can decrease the net real worth of company, it can increase the overall financial stature of the company.

13.1 A the Contents of Financials

Public corporate companies provide a financial report containing all the details of their financial progress and results to the shareholders of the company as well as to the public. Financial reports cannot be made as one wish to. There are certain norms and regulations which are required to be followed. The standard rules governing financial reports is known as GAAP or Generally Accepted Accounting Principles. These rules have been prepared and periodically modified by a group of policymakers with one of them being FASB or Financial Accounting Standards Board. Out of all the financial reports, the one released at the end of every financial year known as the annual report is considered to be the most important. An overview of annual reports provides us with the idea what it contains. It contains a brief description about the company and its business policies and development. The brief description is followed by a formal representation of the company’s finances. As you are learning finance accounting, it is the financial aspect of the annual report that you should be concerned about. In simple words, “how much money is made” is more important than knowing “how it is being made”.

If you haven’t seen any annual report ever, it is necessary for you to go through one I order to gain the required knowledge about them. It is not hard to get your hands on a company’s annual report as they are generally present in a company’s website. The annual reports are mailed directly to the shareholders.

The following tables are the financial records released by PepsiCo for the financial year 2001. Since no major changes have been made to the format of annual reports over the year, this old financial statement will help us understand about annual reports and will also provide us the opportunity to analyze the developments in PepsiCo in the following years in Chapter 20. 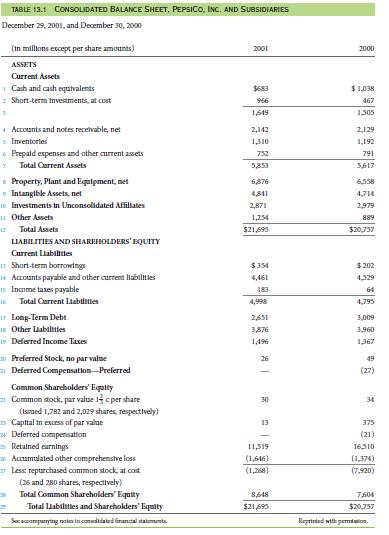 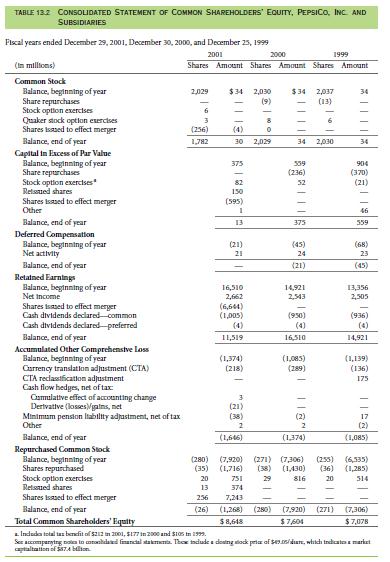 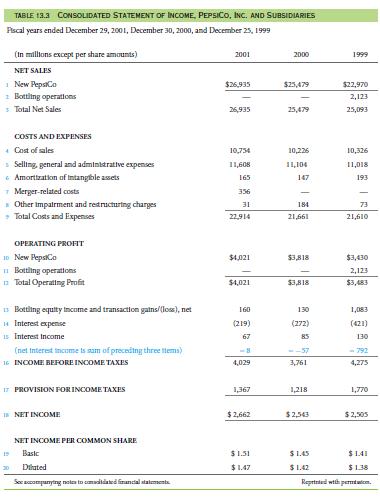 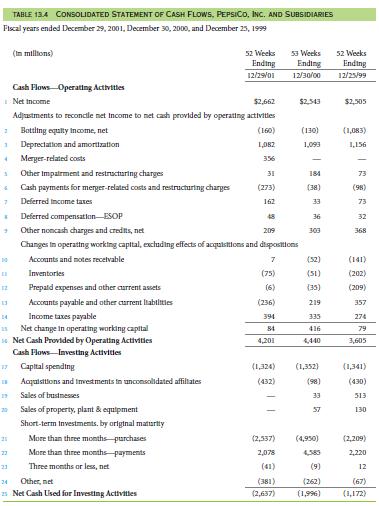 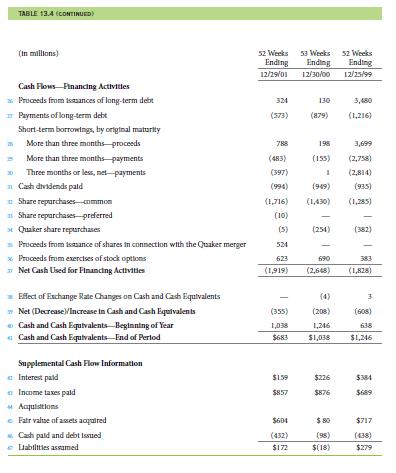 You can get to know about the assets and liabilities of PepsiCo from the balance sheet in Table 13.1. Out of the many assets owned by the company, the assets which can be liquidated easily during times of emergency are known as current assets. These assets are short lived in nature and are generally converted to cash within a year and are utilized by the firms to fund their daily operations. Other assets which are not considered as current assets are expected to generate cash for more than just a year. Noncurrent assets are those which are not easy to liquidate, even during times of emergency.

In order for a share holder’s book value to be equivalent to the market value, the assets and other liabilities need to evaluate properly. But due to certain rules governing accounting, the book value is more of a plug-in value and not very meaningful to our purpose.

The basic difference between a financier and accountant lies in the timing of their records.  A financier needs the exact timing of cash inflow or outflow throughout the duration of the project o estimate the firm value. An accountant’s interest is also regarding estimating a firm’s value. But their methods are a bit different. They take on a more conservative approach while dealing with financial records. Their accounting estimates are based on their degree of need to remain conservative. So even if an accountant is aware of the real value which is higher than the cost, they might not use this information while taking entries into the balance sheet.

Another major point of difference between a financier and an accountant is that an accountant uses annual earnings along with economic cash flow to estimate the firm value. The annual report generally takes into account any expected earning in immediate future. Thus the major point of difference between these two approaches is accruals. Accruals are nothing but economic transactions which are yet to have a cash implication.  A simple example will make the concept more comprehendible. If a man owes your company a sum of $50,000 and he has promised to pay it in the near future, then an accountant will take that $50,000 into account as firm value. On the other hand, a financier will not take it into account while estimating the firm value. That is because a financier deals with the exact timing of the cash flows, hence no cash flow today is equivalent to zero. The basic reason behind an accountant’s approach is that he tries to represent the economic value of the firm at present in a more positive manner. A better image is created through these accruals instead of exact timing of the cash flows.

There are basically two types of accruals known as long-term and short-term accruals. A common example of a long time accrual is simple depreciation. It is not as the name suggests it to be, it is the distributed allocation of an assets price over a certain period of time. For example if you purchase a machine that generates certain revenue every year, then to a financier, it is a machine that causes a lot of cash outflow at present but generates cash in flow for the next coming years. If say the machine was to be replaced every 10 year then the financier would consider it to be many cash in-flows followed by heavy cash out-flow every 10 years.

In the eyes of an accountant however, the cost of the machine is treated as a depreciation of the value of the asset distributed over a certain period of time. For the above example, say if the machine costs $1 million the accountant won’t record the purchase amount of $1 million to be cash outflow at present but instead a depreciation of $100,000 every year in the asset value. Hence the annual income looks better on paper. This form of accrual is known as straight line depreciation. If the asset was to be liquidated within a short time due to financial needs, then neither the accountant’s figures nor the financier’s figures would provide exactly accurate value. The selling value of the machine would completely depend on its market demands and its present conditions.

To make things more complicated, accountants use different standards of time period depreciation for particular assets. Residential properties are depreciated in straight-line depreciation for 40 years. This type of depreciation standards are known as impairment rules. These types of predetermined values are not generally accurate and neither do they take into account whether the house is made of bricks or straws. A properties value might rise if people start taking interest in old houses suddenly. Thus value of old buildings in real estate terms might suddenly double instead of depreciating even though financial accounts might show it to be of very less worth. But in real life, accountants seek help of procedures that enables them to modify value of assets.

An interesting situation arises if the machine that had to be replaced every ten years, continue to work after 10 years. Then the financials would consider it as a $0 expense in the 11th year. Even its worth remains $0 interestingly as the price cannot depreciate any more.  Hence, for the years it continues to work after 10, its value remains the same in the eyes of the financier.

Next we arrive on short term accruals, which can be of any form.  A short term accrual may be a sale of good of $100, where the money has not yet been paid. To the financier, the timing of the cash inflow and outflow is very important, hence it is not considered to be a profit for the company as long as the money is not received. But to the accountant, a sale of $100 is booked into the records as amount receivable. Thus to the accountant, the sale has been made.