The Contribution and Feasibility of HR Planning

If you consider the various statistics as far as the business world is concerned, you ought to come across the fact that the idea of planning of the various HR resources of a particular company has without a doubt played a huge role as far as providing the companies a suitable idea of how they must go about various matters are concerned. This is something that has greatly contributed to the success of various multinational companies all across the globe. However, due to the involvement of a large amount of uncertainty in the business world, individuals have without a doubt opted for more instantaneous options. This is due to the fact that the world has become uncertain to such an extent that it is no longer that easy a task as far as figuring out the various circumstances in the future are concerned. A brief line of separation must be drawn between strategic planning and strategic thinking in the event that you wish to understand this chapter a lot better. In the event that you are somehow unable to do so, let me help you. As far as the first is concerned, the manner in which one must go about is left to the individual himself or herself. This needs to be planned out in a definite manner. However as far as the latter is concerned, it mostly deals with intuition and production. According to Henry Mintzberg, the following suggestions must be taken into account:

As far as the strategy of a particular company is concerned, the planning out of their Human Resource is a key aspect. This is due to the fact that it aids in identification in the following manner:

If you consider the framework of the firm based on the various forms of available resources, this has been discussed in details under the scope of the second chapter in this book. These four points that are discussed in details above are without a doubt extremely crucial, especially in the event that you take this example into account. These will definitely aid in the event that you wish your company to have a considerable edge over the others of its class. One of the major reasons of difficulty behind the idea of planning the human resource of a particular company is the fact that the employees of a particular company comprise of a wide range of employees, each having their very own view at thing. These are certain aspects that can in no way be neglected as the owners of a firm can by no means control the will of their employees. This is what makes the idea of planning so very difficult in the first place, leaving aside the various adverse conditions. However, in the event that an individual’s wishes to ensure that the entire idea of planning of the human resource of his or her company, he or she must take the following aspects into consideration: 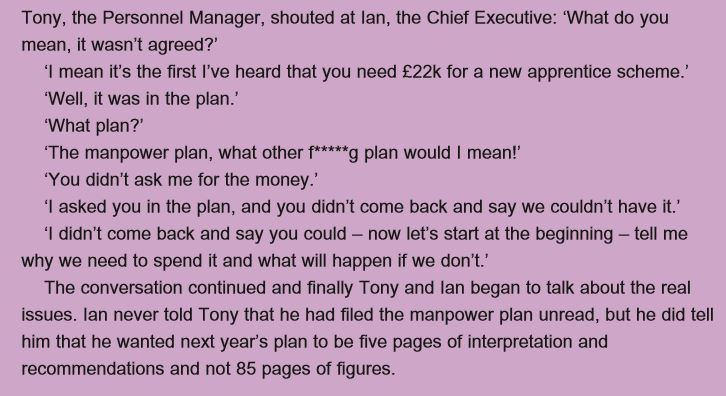