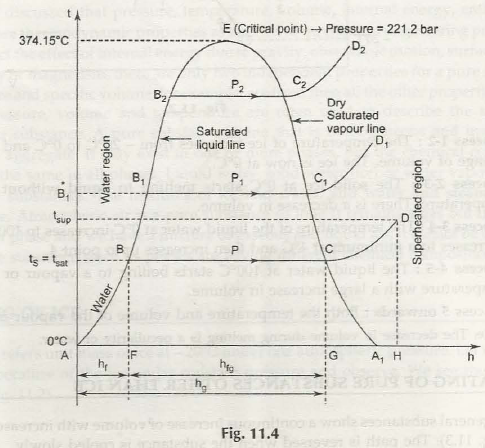 Induction stage- it shows the heating of water up to the boiling temperature. Sensible heat is defined  to raise the temperature of water(1 kg mass) from 0°C to boiling point . it is illustrated by  is denoted as hf” Sensible heat  = mass of water x specific heat x rise in temperature where

Evaporation stage- the superheating process is shown by CD. During this stage the heat absorbed is GI,I which is known as the heat of superheat. The Line AH is a representation of the total heat that is required to go to the superheated point D

Effect of change on pressure

If the pressure bar is increased to P1, then the boiling temperature is also bound to increase.

Line C1D1 shows the constant pressure process in which the steam is superheated (after C1 point).

In a similar stature, the family of curves is different for various situations. The line A- B-B1- B2 is referred to as the saturated liquid line, as it is the boundary between the water and the steam. On the other hand C2- CcC-A1, is known as dry saturated steam as it is known to formulate the boundary between the dry and the superheated steam. The pressure tends to increase the latent heat of vaporization, and this is the stage where the saturation temperature tends to decrease. It reaches a stage of  zero at E where the liquid and dry steam lines meet. At the point E is referred to as a critical point for sure. For steam, critical temperature is 374.15°C and critical pressure is 221.2 bar.

where  hg = enthalpy of 1 kg of dry saturated steam

The enthalpy of heating of water upto saturation temperature

m1= mass of water in suspension

x is also called the quality of wet steam

(i) Work done during evaporation of a wet state

The steam is produced at constant pressure. The entropy is assumed to be zero at 0°C.

(ii) The change in entropy during evaporation is given by

(iii) The change in entropy during evaporation is given by

(iv) Entropy during superheating of steam is given by

(v) Entropy of superheated steam is given by