When stating about projectile motion, in simple words, it is stated as a two dimensional motion. Any particle body when thrown near the surface of theearth, it moves in a certain motion along its curved path, that too under the action of earth’s gravity. That motion is called projectile motion.

After analyzing from a graph, you will find that there isn’t any presence of x component of gravity.

From that analysis, you can see, 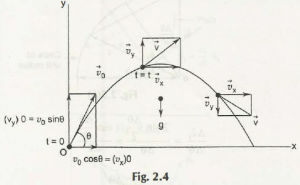 When initial velocity remains the same throughout the projectile motion, another equation comes to the forefront.

After calculation, if you do not find x0 and y0in the initial phase, which you can find as x0 = 0 and y0 = 0, then you need to start the same calculation from the beginning.