Resolution and Composition of a Force

Let us consider a force R is making an angle  with the horizontal as shown in Fig. 1.21 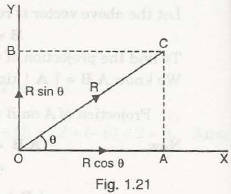 The above components show the resolution of force F along x and y direction.

Resolution of Number of Coplanar Forces:

Forces acting in one plane are termed as coplanar forces and these forces run parallel to the plane. 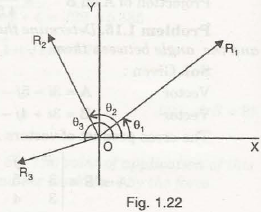 Resultant of all three forces be R

Angle with the horizontal axis be θ

To determine the angle between resultant force and horizontal axis,

Moment of force can be calculated by multiplying the force and perpendicular distance from the point of its line of action.

Let us consider a body of mass M is exerted by a force P as shown in Fig. 1.27 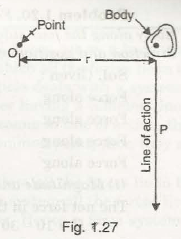 Moment of force can be given by-

If a number of forces act on the body, then the effect of these coplanar forces acted on the body can be equilibrium under specific conditions-

Suppose the resultant component of forces in the plane along any given direction is zero but its net moment of forces is not zero. In such cases, the body is not said to be in equilibrium and it is possible to rotate about the given point.