Equilibrium of a Rigid Body

If external forces may be parallel or concurrent act on any stationary rigid body, it tends to move or start rotating the body about a particular point in the plane. When the body does not move or rotate about any point, it is said that rigid body is in equilibrium condition.

In other words, when all coplanar external forces are in equilibrium, the summation of these forces and its moment are equal to zero. This is also called the Principle of Equilibrium.

Let us consider the forces be resolved into its horizontal and vertical components.

Hence, it can be written as-

∑▒〖F_x=〗Algebraic summation of forces along x-direction

∑▒〖F_y=〗Algebraic summation of forces along y-direction

The equation of equilibrium can be defined by-

For Concurrent Force System (when all forcesmeet at a single point):

The above equations are considered as the force law of equilibrium. It can be applied for different force systems-

When two equal, opposite and collinear forces act on the system, it is called two force systems as shown in Fig. 1.71

F1 and F2 are two forces in opposite direction

Let us consider two forces F1 and F2 act in opposite direction; have equal magnitudes but both are parallel as shown in below figure. 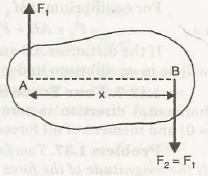 From the force law of equilibrium, we get-

Taking moment at point A can be given by-

Equation (1) and (2) satisfies the force law of equilibrium but equation (3) does not satisfy. It shows that two parallel, equal and opposite forces can produce a couple. 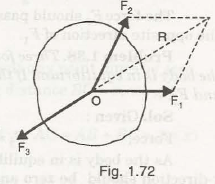 Suppose these three forces are concurrent such that the resultant, R can be given by the line opposite to the force F3. This resultant force is called equilibrant. 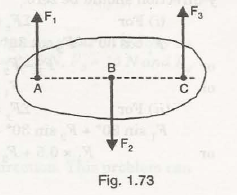 F1 be first force act in upward direction at point A

F2 be second force act in downward direction at point B

From the condition of equilibrium,

Taking moment at point A can be given by-

It shows that if the value of AB and AC satisfy the above equation, then the rigid body is said to be in equilibrium.

Suppose four force system acts on a rigid body such that resultant horizontal and vertical forces are zero and moment about any point is also zero. The rigid body will be in equilibrium condition i.e, 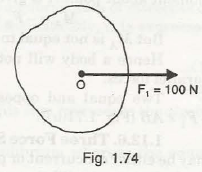 For two force system, the magnitude of both forces will be equal, collinear but in opposite direction. 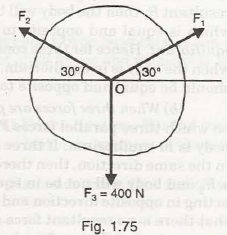 The above figure shows

F1 and F2 are two forces making an angle 300 with the horizontal.

From the force law of equilibrium,

The components of force can be given by-

The value of force F1 can be given by,

We can also find the values of three force system using Lame’s Theorem.

From the above figure, we can write-