When the force system gets its resultant along the line of action of force in the same plane, it is called equilibrant. Similar arbitrary point can also be shown for moment of forces about the point of resultant of force. Thus, it is called the equivalent system of forces that can be formed because of two reasons-

Resultant force can be given by-

Problems on Equivalent Systems of Forces

Fig. 1.87 shows L-shaped body. Find the magnitude of three external forces which are acting on it such that the body will have equivalent system through point O. 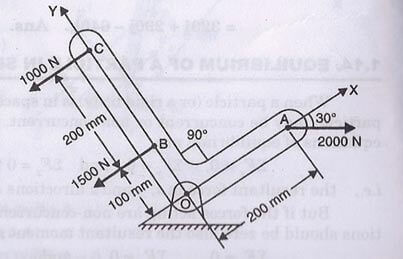 Force, F1 making an angle 300with the X-axis as shown in above figure

Resultant R will be passing through a point and moment MR

Components ofF1 can be given by-

According to the equilibrium of forces, we can write-

Resultant can be given by-

Moment of forces at point O can be given by-