All of us know that we should eat healthy food and stay active but still the problem is very few do follow that. We resist the changes we make in the lifestyle. Companies like Volkswagen Sweden & DDB Stockholm conducted an experiment to see that whether they can change the attitude and behaviour of the people or not and they choose a healthier habit of using the staircase instead of using the escalator or lift. How? That is a rather funny way. They had put a walking piano keyboard over the staircase in Stockholm station to watch that whether the people would use this option or not instead of the escalator. You can check the video on YouTube. The good news is that 66% stairway traffic rose within a short period of time. Here the lesson is- if the appealing is strong enough, people will surely change their habits.

Change can also be threat to the people working in an organisation. The companies can build inertia which motivates people resisting changing to their status, even though changes might be to some extend beneficial. The question is why people do resist changes & what is to be done so that their resistance become less?

Why the people do resists change?

It is said that mostly people hate those changes which does not jingle in the pockets. Such resistance for changing is well reported. But why do they do this? The chief reasons to resist changes are mostly habit, uncertainty, concern on personal loss, & the belief is that this change isn’t in the company’s best interest.

The changes replace known with uncertainties. Though you know that you simple hate attending the college but at least you go to college because you know what is expected from you. As you leave the college and step into the world of employment and labour you will do the known for something unknown. The employees in the organizations have actually to face such uncertainties. One such example is when the quality control method which is based on statistics model is introduced in manufacturing factories; many inspectors on this stream have to learn these new methods and techniques. Here is the problem. Everyone may not be able to use these new techniques and methods thus might think themselves incapable of doing the work, this will further lead to their dissatisfaction from the changes. Thus a negative attitude will start growing and the might start performing poorly.

Another reason of resistance is we do those things that are out of habits. Every day most of the people and children when they go their respective work place or school they will take the same route mostly. We are creatures who are surrounded by habits. Our Life is a complex one- we make hundreds decisions but we do not want to consider full ranges of options. So to avoid more complexities in life we generally try to stick with our existing habits and programmed responses. As when confronted with the change, the tendency of us responding in a particular accustomed way becomes the sources of resistance.

Another reason of this resistance is the surrounding fear of losing things that we posses. Changes threaten all the investment that you might have made in status quo. So the more people have been investing in current system, the greater they will try to resist the changes. But why this happens? The reason is people fear risk of losing property, money, status, authority, personal convenience, friendships and many other economical things and benefits. This is the reason why an older employee tries to resist the changes and not the younger employee. Simply because the older one posses all the things mentioned above and fear of losing them while the other one does not possess such things much and hence his fear is much less.

Techniques of Reducing the Resistance to Changes

When the Managers find out that the resistance to changes is dysfunctional, what steps should they take? There are several kinds of strategies that are suggested to deal with the resistance to changes. Such strategies include communication & education, facilitation & support, participation, negotiation, manipulation & co-optation & coercion. Such strategies and practices are summarised in the Exhibit 6-5. See to get better view. Managers can see these techniques and use them in appropriate situations and based on the type and source that the resistance is coming.

Education & Communication can be used to reduce this resistance as this technique helps the employees to use logic and see the effects of the changes. According to this technique we can see that most of it lies due to miscommunication and misinformation. 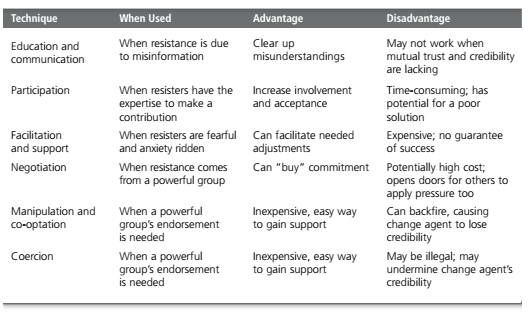 Next is participation. This involves bringing individuals who are directly affected through proposed changes in the decision making processes. This participation allows increase in the quality of process, individuals expressing their feelings, also increase of the employee commitment towards the actual decision.

Support and facilitation is helping the employees to deal with fear & anxiety which is mainly caused by the changes that occurs. In this strategy certain tools are used such as employee counselling, new training, counselling, therapy, also short pay leave.

Negotiation is changing something related to value for agreement so as to lessen resistance to change effort. When the resistance source is very high, this resistance technique is very useful in such situations.

Manipulation & co-optation is the technique of coveting attempts so as to influence other employees about the change. This resistance technique is also very useful as it makes the change look more attractive.

Coercion is the use of threats or forces against resisters directly.