2B. Ladders and Steps

As far as career is concerned, each employee in the firm is served within a salary arrangement of each family which includes ladders in each grouping where each ladder is followed by different steps. The result of this hierarchy can be portrayed in the annual report of model increment where employees are awarded on the basis of their seniority in the firm. So talking about an employee who is new starter in the firm starts his journey of pedaling while they assigned the lower ladder under a proper grading and grouping. And every year or within few months, the employee is rewarded with better pay and increment which means they are climbing the ladder gradually. But what if they reach the top of the ladder already? At this point they are not being promoted gradually, but in fact, is given a chance to improve their grading at a job in order to jump towards the lower step of the next ladder.

One can understand the same with an example of Business Development Executive. A BDE is rewarded increment after 6 months. Once the employees reach the highest value of grading at his/her position, they are promoted to manager level which means their job families will change. Under the payment administration view, the employee has jumped to a new ladder on a small step and will work in order to climb up that ladder. And when the employee proved the loyalty to the firm, they can be jumped to the different ladder and the process goes on.

But this procedure does not continue for long as some employees look for a better change which means they want to climb up the ladder in a different organization. Some of the employees resign and some of them get retired. Whether the employee is authorized to jump from one ladder to another is a decision of the management and can only be justified when the employee prove the highest grading at each step.

At some ladders, employees face a dead end which means they cannot be promoted any further. Under such a scenario, employees who are engaged on this level are generally those who are on the edge of retirement or at a highest position under the field of expertise. Figure 27.2 will help you with better illustration on the ladder and steps involved with each family section. 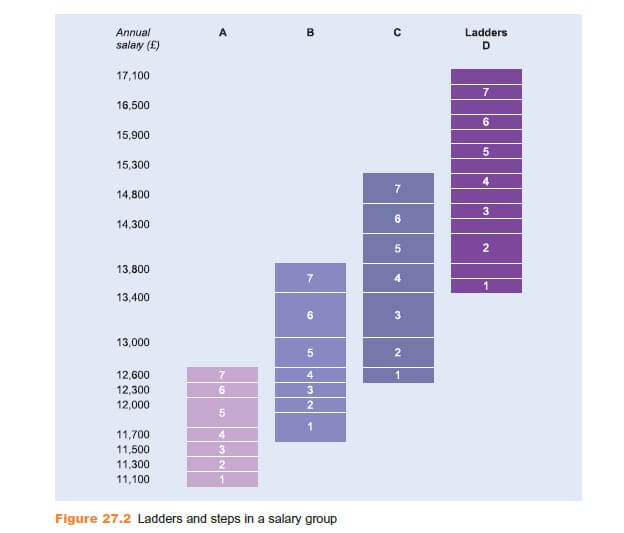