In the Cambridge University researches claims that men who are with long ring finger than the index finger tends to become more successful in frantic high frequency trade in London finance district. Now what does study on the size of ring finger has to do it with the theory of traits in leadership? This is the same thing that leadership theory has suggested that is identifying the traits of a true leader.

A research on leadership in 1920 & 1930 mostly tends to focus on isolating leaders characteristics- that can differentiate the leaders from the non leaders. Some of characteristics study included physical, appearance, emotional stability and social class, sociability and fluency on speech. In spite of the continuous efforts of the researches there are not any particular traits discovered that can differentiate the leaders with the known leaders. The main 7 traits which are talked about in the chapter are properly described in Exhibit 17.1. See there for further details about the topic. However these traits later were continuously related to leadership and became successful.

Researches suddenly started realizing that these traits are not enough identifying exact leaders. This was because the explanations which were based on such traits ignored he important interactions between leaders and the interactions between leaders &
their employees. Also the situational factors were not recorded in such explanations of traits. Possessing only the exact traits just made them more that only individual would become effective leader. So the leadership researches from late 1940s-1960s concentrated preferable behavioural style those leaders demonstrate. The researchers often wondered that whether there were some unique traits of leaders which they used or some unique behaviour was their key. 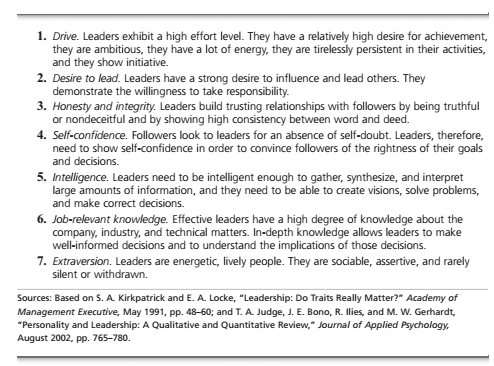 The CEO of disk drives manufacturers Seagate Technology, Bill Watkins, did respond when he was asked how did he react to the Board of Directors opinions. He replied that he should never ask what the BOD thinks or what is there opinion, he should only let them know what he thinks. In contrast the CEO of Darden Restaurants, Joe Lee, was focused basically of 2 things- his company’s colleagues and the Darken people who were travelling. As you will see the 2 leaders of the 2 different companies actually behaved in different ways. Now what you know about the behaviours of leaders and how it can help us understand what an effective leadership is?

Researchers has hoped that behavioural theory approaches would actually provide more appropriate answers on the nature of leaders that that trait theories. The main 4 leadership behaviours are properly explained in the Exhibit 17.2. 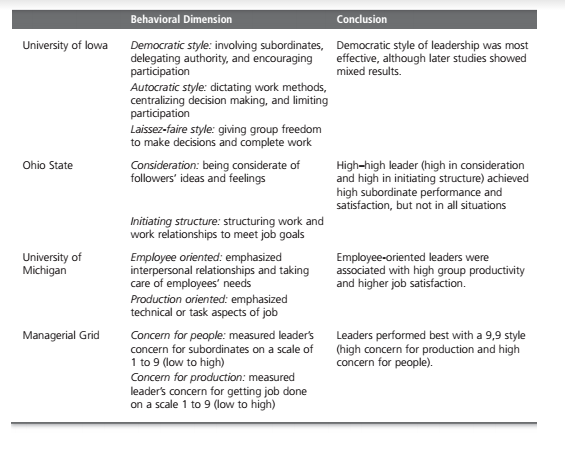 This university has explored 3 different leadership styles to know which the best among the 3 styles was. Autocratic Style described a leader who actually dictated different wok methods, started making unilateral decisions & limited employees participation. In the democratic style it is described that the leader who encourages employees to indulge in taking decisions, delegated authority & use feedback as opportunity for training employees. And the laissez faire style lets the employees to take their own decisions and then complete the task in whatever way they think it is correct. The researcher’s result seems to indicate that democratic style contributed both great quality and quantity of work.

Now did the answer of this question have any particular effective style of leadership that would work? But the answer to the question was not that easy. Later studies on the two above said styles got mixed results. Sometimes the democratic style has given higher level performance results while the other one failed, again at times the autocratic has given good results that the democratic one. So the results are mixed and uncertain. More consistent result was found measures of employee’s satisfaction were used. It was seen that group members became more satisfied with the democratic one rather than the autocratic one.

This brought a dilemma for the managers or leaders- whether they should prefer employee satisfaction or high performance returns? This recognition on dual nature leader’s behaviour focus on employee and focus on task became key characteristics of other behavioural studies.

There are 2 important areas of leadership behaviour which are identified by the Ohio State Study. Starting with the list of more than about one thousand behavioural dimensions, researches eventually narrow it down at just 2 that accounted for the most of the leadership behaviour described by group members. Among them the1st was known as initiating structures- extend at which leaders has described their roles 7 the employees roles or group members so as to attain that goals. It involves behaviours that add the attempts of organizing work, work goals and relationships. The 2nd was known as considerations- the extend at which the leaders had work relationship characterized by respect and mutual trust for employee’s feelings and ideas. Leaders who were high in consideration did help group members or employees in their personal matters and problems, treated them with great care and had a friendly approach towards them. Such a leaders showed affection and considered all the feelings of his/her followers, their comfort, problems, status, well being & satisfaction every other thing as if it was his/her own. Researchers found that the leaders who were high in creating consideration and structures at times achieved both high performance returns as well as high employee satisfaction, but this did not happen always.

The University of Michigan Studies

The leadership studies that were performed and researched in this university as it was done in the Ohio university were conducted at the same period of  time, conducted to identify the behavioural characteristic of leadership that was related to performance effictiveness. There were two dimensions that were thought about in the Michigan studies about the characteristics of leadership. One was production oriented and other was employee oriented. The leaders of employee orientation always maintained inter personal relationships with the employees. The 2nd type of leaders mainly focused on the task which was to be done rather than employees. The job was more in their focus. Unlike other studies this group finally concluded that the leaders who were employee oriented were actually successful in making high productivity of the firm as well as high employee satisfaction.

The behavioural dimension from the early leadership theories provided the actual basis of development of two dimensional grids for praising leadership styles. The managerial grid has used the behavioural dimension concern for production and people & ten evaluated the leader’s use of the behaviours by ranking them from scale one to 9 that is from high to low. Though this grid had eighty one categories in which the leader’s behavioural style falls among them only 5 of them were named. They are impoverished management, task management, middle of the road management, country club management & team management. The researchers finally concluded that among the above list the leaders performed the best by using the 9, 9 style. In spite of the efforts the grid did not offer the answer that what is makes a manager a true leader. All it did was providing a framework to conceptualize leadership style.