There are lot of stories that are heard in the corporate world about failures of leaders because all of them have failed to know on what sector or purpose they are working on. Here in this chapter it is explained 3 chief contingency theories. They are Fiedler, path goal and Hersey- Blanchard. Each of them has different concept of leadership style & features & also attempts to clarify the if and then contingencies. It means on the basis of situations which leadership style will be appropriate.

Fiedler said that to become a true successful leader and then give success to the firm requires a particular kind of leadership styles that can be task oriented or may be relationship oriented. So as to measure this leadership style and identify it he made LPC questionnaire. These questions contain about eighteen pair of adjectives that are contrasting. Examples are hot cold, pleasant unpleasant, friendly unfriendly, boring interesting etc. Now respondents were basically asked to rank the co-workers with in the scale of one to eight and rank them on the basis of the 18 adjectives. They have to mention the person with whom they have least enjoyed with and most enjoyed in the ranking system.

If here the leader described the preferably least preferred worker in positive terms then this respondent is primarily interested in better personal relationships with the co workers& this style can be described as relationship oriented style. On the other hand if you see the least preferred worker in rather unfavourable term you will be primarily interest in productivity & getting down the job. So your style can be labelled as the task oriented one.

Fiedler on the other hand acknowledged that a little no of people might can fall in between the 2 extremes and not have any cut dry leadership styles. Other thing that Fiedler observed that that leadership style of a person is not fixed that is the style is fixed for every situation. Whether you are a task oriented or relationship oriented your nature will be same in all situations. 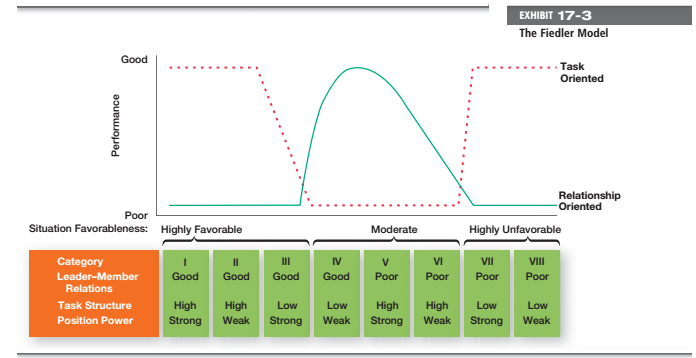 As Fiedler managed to describe the situational variables and leadership style variable he has everything given that are needed for defining specific contingency on leadership effectiveness. So to do that he has studied over 1200 groups to compare the relationship and task oriented styles which falls under the 8 situational categories. What his theory said is that the task oriented ones are successful in both favourable and unfavourable situations no matter what happens. See Exhibit 7.3. In contrast to this relationship oriented leader performed much better in the moderately favourable situations.

As Fiedler has said that the leadership style of individuals remains fixed in every situations there are only 2 ways that could increase leadership effectiveness. One can be by bringing any new leader whose style suits the situation that has occurred there. Such as if the situation of the group is too unfavourable but is managed by a relationship oriented one he must be replaced by a task oriented one to deal with the unfavourable situation.

The other thing can be by changing the situations so as to suit the leadership style. This can be done by increasing and decreasing the power which leaders have such as granting, promotions, firing, hiking in salaries, maintaining discipline or by restructuring the tasks performed. This can also be done by improving leader member relations.

Hersey and Blanchard had been successful in developing a leadership theory which has already gained strong following among the management development specialist. On this model this is known as situational leadership or SLT theory which mainly focuses on followers readiness. 2 points needs to be clarified before we move further. What is the meaning of the term readiness & why leadership theories are focusing on followers?

SLT has identified the same leadership dimensions which Fiedler has already identified: relationship and task behaviours. They are being evaluated with high or low factors. Then they re combined in 4 leadership styles that are described in the following:

The final part of the component in this model are the 4 stages of the follower readiness:

SLT basically is trying to make the readers understand that this is a father and child relationship. As the child becomes mature fathers needs to relinquish the control on child. It is that simple. As the followers are reaching higher level of readiness here the leaders response not just by decreasing the control on the activities they do but then they again decrease the leadership behaviours. What it says is that the leader has to be both willing to do the work and make his employees do the same.

There is other approach to get know the leadership theory that is the path goal theory. This approach is based on certain rules and terms. This states that the duty of a leader is to assist his followers to achieve their goals and give them every help they need to achieve that goal. They have to ensure that these goals are compatible with the actual goals of the organisation.

Path goal theory is the replica of the theory on motivation. Robert House developed this goal. This goal theory states that leaders have the responsibility to clear the path through which the followers have to go through. Rather all the obstacles of achieving the goals needs to cleared by the; leaders so that the followers can straight move towards their goals. This will help the followers to achieve their goals.

This theory is a complete contrast to Fiedler’s view. Robert says that a leader can change his/her behaviour or style in different situations and can change his behaviour according to the situational factors. This is quiet opposite to what Fiedler has said. 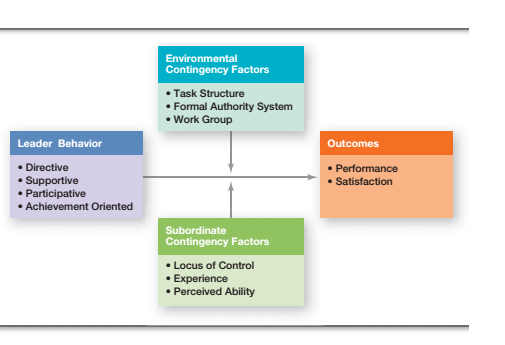 The theory is saying that leader’s behaviour is not a big factor if the situational factor is constant. Following are the list of some predictions of path goal model:

There are mixed support of the path goal model. We can make it short. An employee’s satisfaction and performance are always positively influenced in when the leaders choose a particular leadership style which compensates for short coming in either employee or work setting. What is noteworthy is that if the leaders try to explain tasks and direct term on tasks that are already known or clear by the employees, the employees might find it insulting or redundant if the leaders do so. Thus this theory is completely based on the behaviours of the followers towards the leaders.