The managers at the Verizon Wireless know what changes actually are. In an industry where there are rapid changes all around, a company should special skills to cope up with the situation. Verizon is one such company which is prepared for some challenges & focused on its changed efforts on the people & processes.

What is an Organizational Change?

Every Manager at certain point of time has to change their decisions and work schedule in their respective workplaces. This is what we call as an Organizational Change that is alteration of employees, staffs, structure and technology of a firm and its production. This organization changes needs someone or something to act like a catalyst & assume the responsibilities for the management of the changed processes, a change agent. This agent can or cannot be a manager of the organization. Not necessary that managers can only be the change agents. A change agent can also be a HR member or someone from outside of the organization. He can be a consultant. In case of major changes, when it is needed an organization mostly hires consultants or advisers from outside sources to help the company to take decisions.

As they came from outside sources and are not part of the inside of the organization they have different prospective which the insiders of the organization may often lack in. But the problem is an outsider is obviously not well known to the company’s history, its day to day working, operating procedures, employees and its own pattern of activities which an insider knows very well. The outside change agent often implements a drastic changes on the organization’s pattern which obviously an insider will never dare to do, because the repercussions of the changes will be solely faced by the insiders and not the outsider change agent. On the other hand internal managers will be very much thoughtful before taking any drastic decision and be overcautious about the effects that they will have to face if they takes any wrong decision or implies any wrong changes.

The Managers of organizations faces 3 types of changes- technology, structure and the people. Check Exhibit 6-3. Changes in structure may include any type of changes in structural variable which includes reporting relationships, employee empowerment, coordination mechanism & job redesign. The changing technology mat encompasses modifications the way methods & equipments are used and the activities are performed. Whereas changing people means changes in expectations, attitudes, perceptions & behaviours of groups or individuals. 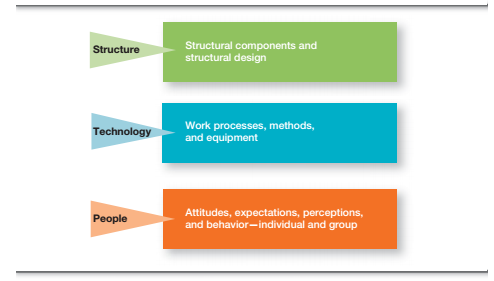 Making major changes in the main structural design can be another great option. When Hewlett Packard developed Compaq Computer the product divisions were merged dropped & expanded. The structural designs which changes also includes a shift on functional to product structure and creation of the project structure design. For example, Avery- Dennis has changed and recreated its structure into some new design which arranges works around teams.

The changing of technology

The Managers of organization now also changes those technologies which were meant for converting inputs in outputs. Early management education deals with moving technologies. One such example is scientific management ones involved some implementation of changes which can increase the production efficiency. In today what technological changes means is that introduction and use of new machineries, equipment and new production process, computerization and automation.

Due to the competitive market the innovation which the mangers have to bring within the industry mostly includes modern operation method and new equipments. For example in the New South Wales the coal mining companies started using updated production methods, they installed modern coal handling technologies. Not only that they updated their work practices to increase the production efficiency.

Automation can be termed as technological changes that basically replace every tasks done by the labours to be done by machineries. This automation is introduced within the USA postal service companies where automotive mail machines are used & here the robots are used instead of individuals to perform those work which are supposed to be done by the postal persons. Computerization has lead to the most visible modern technological change that has ever occurred. Today many organisations has sophisticated information system. According to that most super markets and shopping malls uses automatic scanner which provides instant information about the product. Every manual job is removed with this computerization. Not only that now are days most of the offices worldwide being computerized. An employee in BP has to learn how they can deal with any personal visibility & accountability which are brought by worldwide enterprise information systems. This system was mainly used to know that whatever the employee did in his machine will be automatically reflected in the machines of other employees within the internal networking system. Thus computerization has lead not only to decreases the work pressure on employees but it also keeps a check on any kind of speculations which often occurs in a manually operated internal system. Many companies and offices throughout the world has shifted to computerization and gets internally connected to each other.

Here changing people means changing of the behaviour, attitude, expectations and perceptions of individuals that is not an easy thing to do. An Organizational Development (OD) means to describe every changed method that focuses on the people & the nature & the quality of every interpersonal relationship. See Exhibit 6-4 to get a clear view of the popular OD techniques used. Each of them is used to bring changes in the thoughts, minds and behaviour of the individuals and let them work together in a better environment. The executive managers of the Scotia Bank to gain success in respect of more customers and sales completely depend on the changes that are made within the behaviour and attitude of the employee group. The Managers started using different types of OD techniques to change the attitude of the employees in the time of strategic changes such as survey feedback, team building & inter group developments. This became such an hit that in every Canada branch these techniques were implemented which had let their sales and customers to increase to a huge rate. This attracted more and more people to these banks and thus became a big hit. 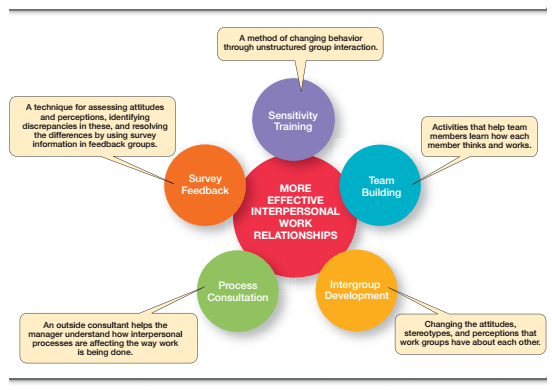 These CD practices most of them have come from the North America researches. But here is a flaw in the practice. Managers have to be careful because the technical OD practices that work in the USA may not be applicable within the organisations and organizational groups in other country.  One such instance is that it has been observed that the survey feedback practice which was used in the United States was not appropriate for Taiwan. This was because of the cultural values of Taiwan. This practice was not embraced here. Now what can the managers learn from these examples? When each technique is implemented in country managers need to be alert about the cultural characteristics of the country where it is to be implemented. They also have to be sure that whether this practice is going to accepted in the local society or not.