There are lots of difficulties which the managers have to face while managing the company. These issues are discussed below in details.

Before the year 1981, the word ‘layoff’ meaning complete separation from the working world without any intention of being called back was very uncommon. However, over the years things have changed a lot. Layoffs on in other term ‘downsizing’ means a well thought plan to eliminate certain employees from an organization are becoming very common these days. This takes place especially during economic downfall or during recession.

Many well know companies had to resize due to this problem, some of them are General Motors, Volkswagen, McDonald’s, Dell, Siemens, and eBay, Honeywell, Unisys, Boeing and many others. However, managers have to handle this situation very carefully. The workplace is going to get highly affected; disruptions are bound to occur in the employee’s life. Frustration, anger, stress, anxiety are some of the typical reactions of every individual who is being laid off from the company and also of those who survived this harsh situation. The picture given below shows some ways in which the employees can lessen the trauma. 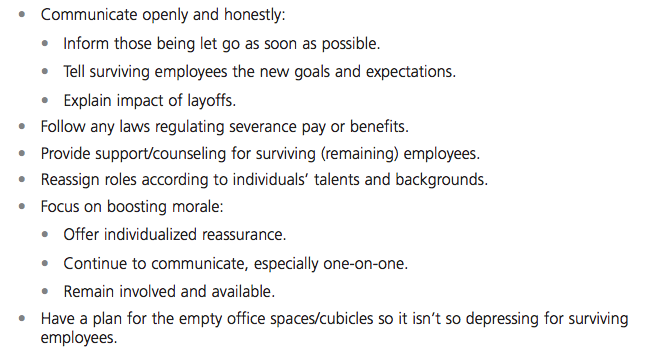 Sexual harassment is a very serio­us issue and should be taken very well care of. This occurs both in the public as well as in the private sector. During the year of 2009 almost 12,700 complaints were filed under sexual harassment. These were filed with the EEOC also called the ‘equal employment opportunity commission.’ Majority of these complaints were made by women. All the companies in the Fortune 500 had lodged these complaints and only one-third of these were sued. Day by day it is increasing and it’s becoming a global issue. Studies have shown that 30 to 50 percent of women in the industry had lodged sexual harassment complaints. There are several lawsbeing made for this kind of offence. But on the other hand, the office environment becomes very hostile and unpleasant to work in.

So you might think, what is sexual harassment? It is basically an activity which is of sexual nature that affects the victim’s life in somewhat drastic manner. Sometimes, it can occur between the same sexes or more commonly it happens between people of opposite sex.

Another question that pops up the mind is that what should a company or an organization to make itself immune to sexual harassments? When such a complaint is filed, the court of law wants to learn two things. First is whether or not did the organization know about this and the other is what did the manager or the person in charge did in order to stop it? The responsibility of the organization is immense and all the employees should be well-educated about on matters of sexual harassment. Actions need to be taken against the person who filed the charges.

This is a serious issue when it comes to sexual harassment. A study has shown the fact that about 43 percent of the men who were single and about 28 percent of the women who were single are open to  workplace romances and is ready to date their co-worker. This is attributed due to the present scenario of the current industrial environment in the organization. Team work and long hour work back to back has contributed to it. About 67 percent of the employees feel that there is no need to hide their relationship at the workplace.

However, it is a very common problem and can potentially pose a great problem for the organization. Conflicts between these co-workers usually result in sexual harassment especially when it is between a senior and a junior. According to the standards of a judicial court, it is clearly mentioned that any kind of sexual or romantic conduct at the workplace is prohibited. However, it is not against the law to have a relationship at work. Recently the supreme court of California mentioned that sometimes workplace romances, which are consensual, might create the environment of the workplace a bit hostile and it might be difficult for others to work in that kind of environment.

People spend a majority of their time in the office and workplace romances are becoming inevitable. However, in order to prevent it from growing into some kind of a bigger danger to the organization, the employees should be well educated and should know the dangers of workplace romances. However, if the matter is between that of a junior and a senior the persons should take a more pro­-active turn towards it. This is one of the major departments the human resource should be concerned about.

Managing between the personal life and work life

Managers are not someone who thinks that employees coming to work lave their personal life behind and come to work. Although managers or department head are not very sympathetic towards the personal life of the employees, they slowly understand that importance of having a good background, they understand that the employees might have an old parent or sick children back in their home. In response to this, there are many organizations which are issuing ‘family friendly benefit,’ with this; the employees can now fulfill the balance between their family and work. Stressed work and the requirement to constantly travel for work has even made it difficult for the employees to maintain a proper balance. Alost 87 percent of the managers or executives believes that if the management of the company at the top­ level is to be restructured then the productivity of the organization will increase by a great deal. The conies should provide enough flexibility to the employees so that they can properly maintain their family as well as work.

A certain survey has shown that more than 50 hours a week is spend by the college graduates at work. A high percentage of women and minority people were unemployed because they have loads of family responsibilities and very little time to spend at their house. Research has shown that companies are bound to have positive outcomes once the employees or the workers combine the family and work. There are different approaches towards this. Some organization believes in integration of family and work by flexing the schedule so that they can provide sufficient time to their family as well. Another example is on-­site child care unit. This helps to maintain a proper boundary between work and family and also lets the employee keep a close eye on the child. These employees tend to be more committed and satisfied with their jobs. Some organizations also provide family picnics, which are company sponsored.

This is one of the major problems the HR department has to face. The employee health department is especially costly which also includes pensions. These organizations are looking for an alternative way to control these costs.

Examples like Paychex, Black and Decker, Amerigas Propane and many more organizations are illustrating how companies should manage such overpriced and skyrocketing cost for health care of their employees. Since the year of 2002, the average price range of health and care has risen to about 15 percent of the normal and is expected to rise even more up to at least double from the year of 2016. A recent study has shown that the employees who all are averagely obese are tending to perform poorly in their jobs than other employees. The prime reason of such poor performance is due to low mobility leading to severe problems such as arthritis and many more. Companies are taking up several steps to reduce this major problem. Companies are given free or sponsored health checkups and other incentives financially for the wellness of the employee and to ensure that they are leading a healthy and proper lifestyle. About 41 percent of the recent companies use such method to encourage proper lifestyle of their employees and according to study; this method has proven too successful.

Right from the year of 1996, the companies have soared up the amount of these incentives by 34%. Recent companies such as Yamaha, Google, Caterpillar and many more are putting up with these incentives and also setting up break rooms with healthy food for their employees, they are also keeping check on the calorie intake of the employees. Some companies have taken big steps for those employees who smoke, in some cases they have increased the amount smoker employees pay for their own health insurance whereas in some cases, they have fired those employees who have refused to quit smoking.

This is another major area where the organization is looking forward to make amends. Pensions are around since the late nineteenth century. However, with the passing of days the employee pension also needs to rise a bit. In the recent times it has become a huge burden for the company to bear and thus some of them cannot afford it any more. For instance, IBM has frozen the pension plans for the new employees who are hired after and on 2004. Thus, it still remains a big problem because on one hand the organization is trying to attract young and talented people fit for their company on the other hand they are having problems keeping up with the pension plans.