It was Richard Boyatzis who made the research on the prime aspects of competencies. As per the study that he conducted on this aspect, the study was intensive, of larger scale and was dependent on 12 establishments, jobs of 41 types, and with 2,000 managers.

As per his findings and description, competency is stated to be of a particular characteristic, which no doubt is underlying, of an individual. The outcome of it is basically focused on excellent performance as well as its effectiveness.

It can also be said that competency is more or less like a trait, which like an individual has efficiency, quality as well as characteristics. Its belief lies on the concept of fate or future. In case you face any issues, instead of waiting for help to arrive, you usually take up the challenge and try to come out of the problem.

We can also relate competence to be that of a motive. This acts as an accelerator which drives an individual to work hard and reach their goal. This is basically a try to achieve improvement and giving a tough competition to attain the excellent standard.

Calling to be similar to that of skill, competency can be stated to have the capability to acquire performance goal (that is related functionally) and also demonstrate behavior sequence. To explain this, we can take an example of an expert of cars. It can be said as the skill of a car expert who can easily diagnose any fault in a car. This expertise is because if his or her tuning with that machinery.

Because of that individual’s skill, he or she can recognize the actions that the car showcases and after relating all the sequence, the person can reach a definite objective. Skills such as this are extremely helpful to recognize any form of hindrances. It is only after identification can provide the path for overcoming those can be found out.

Skill application is not only applicable to the circumstance related to cars or any machinery but on varied areas too.

Self-image of an individual may be considered to be competency. It can be explained as the evaluation that person makes for himself or herself. This assessment is done on the basis of the environment in which the person resides or performs a task.

Suppose a candidate has the belief of being innovative or creative. That person also relays the fact that he or she is caring as well as responsive. In case that person gets a certain task where self-discipline and routine work is a must, the belief of that person requires to be slightly modified. With the same ideology of being innovative, creative,caring and responsive, the stance requires to be with the inclusion of self-discipline.

Perception related to competency is also dependent on behaviors and social norms of an individual. The acceptance only comes when that person totally adapts to that perception and fits perfectly like a puzzle. Its outcome can be like that of a knowledgeable body.

These points stated above can be known as the competency elements. With all these elements, there are basically3 things that can be performed on them. They can be:

On the basis of competency threshold, Boyatzis did give another of its explanation. In order to perform any of the jobs, an individual requires having few of these traits,

These factors are definitely important. However, you cannot take these to measure job performance on a superior level. Superiority level may include communicating with a subordinate or a client on their native languages. Here is a table that can help you understand about the elements. 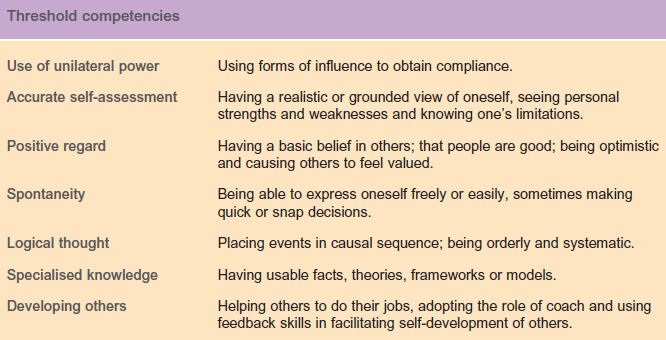 As you will be reading further, you will come up to a certain table which will assist you in comprehending about those competencies which are clustered together and whose requirement is mainly for superior performance. As we are talking about clusters, that which is related to action and goal management is focused with the inclusion of consistent goal plan.

Going deeper for leadership cluster it clearly explains the fact how people can be activated. Few of the methods that this cluster highlights are:

Now, if we discuss about the cluster related to human resource management, it does concentrate on group coordination and management so that an official body can work together and reach its goal.

If you talk about the other clusters, most of them will relate to viewpoints of people and events. The additional info will be dealing with factors related to maturity.

Another of the clusters related to directing subordinates is mainly based on the provision of details to subordinates. It is focused on info interpretation, adding valuation in both negative and positive sides as well as enhancing the performance required for a specific task.

The framework of Boyatzis is based on influence at a certain stretch. When discussing about it, there are many consultants who carry their work on the field of training. But it is also a fact that it has gone through stretches of criticism. There was skepticism in the minds of practitioners and academicians who found the methodology of the framework to be complicated. This was particularly when translating from information to action.

It can be said that Boyatz is mainly focused on the historical aspect and not that much on the practical one. Nevertheless, it cannot be neglected how important his work was. It is still at present use where his work is taken as a reference for a demonstration of complications in certain scales of management jobs.

Again, there are also aspects which relate to the framework of competencies that are customized. It mainly is derived from development and training done in huge corporations. This description was also supported by Brewis, who made his thinking clear in the year 1996.

Later in chapter 14, you can come to know more about competencies. There the focus will be on emotional intelligence competencies as per that of Goleman.

There are many things that companies find to be valuable. It is for those elements where behavioural competencies come to help with their explanation. Feature of such competencies is used to seeing the outcome of superior performance. It is because of these features where integration of critical mechanism is possible. It mainly relies on human resource practices and development which is important for a strategic approach. It can be said that this approach is highlighted for human resource department.

So from this information, it can be confirmed that after complete research of competency framework is complete, its design can be utilized for many purpose. Some of the important sections in this are:

It is this technique can the employees be made aware of the valuation of their work. Not just this aspect, but a company with this methodology can make sure to state their expectations from their employees. 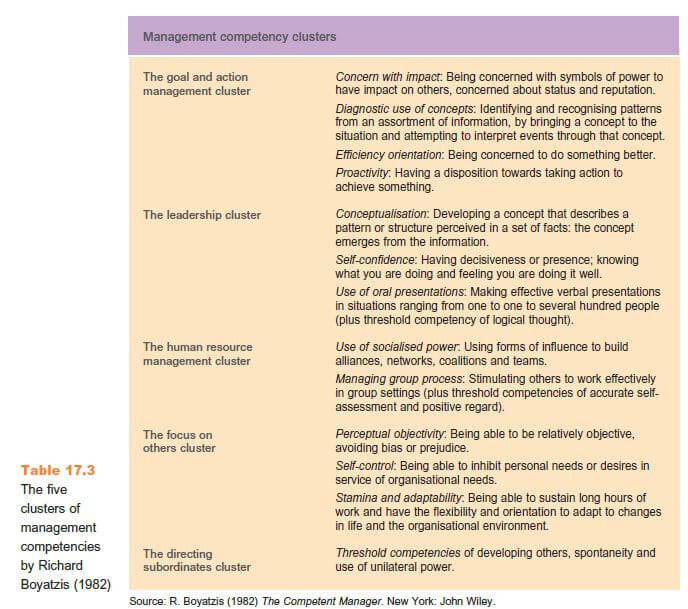 In most cases, it has been found fragility at this link. This can be clearly stated with the help of an instance. Suppose there is a formation of a new company that has been established by William and few of his colleagues from his previous workplace. As per the requirement of their company, they were willing to recognize managerial competencies and all the sets related to it, which do explain the method of being a successful manager.

However, there wasn’t an emphasis in performance appraisal when there was the inclusion of competencies. Still, there are certain aspects that serve as a beneficial point when it comes to the expression of competencies. On expressing competency framework, it can be said that it can be used for all HR processes. The reason for such statement is this framework being easily measurable and having a plus point of being expressed in the form of behavioural approach.

On taking account of these details, it can easily be implied that training can be given to assessors or evaluators in development centres. The main idea is to make observations on the type of responses on variation in behavioural aspect. Candidate behaviours can be easily noticed and recorded by the individual assessor in these types of centres.

Here is a chart that will help you relate to the details that we have discussed above. 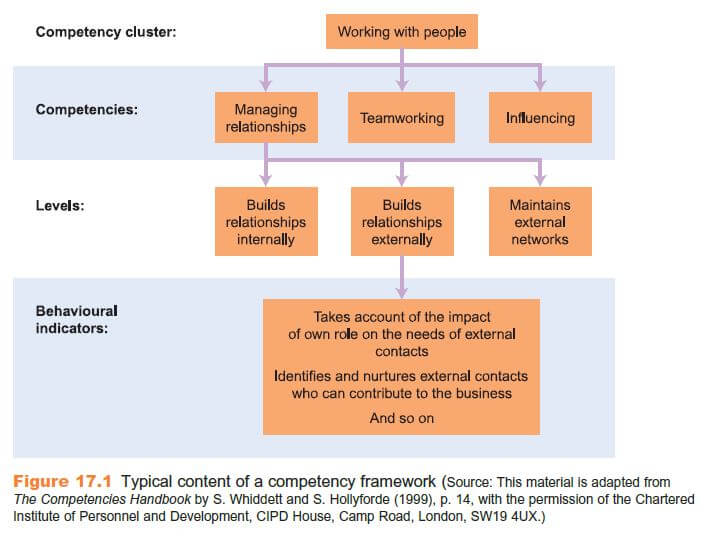 Aspects in variation for behavioural competencies and related to numerous issues

Many criticisms have been applied in this complicated process. It is mainly dependent on the research work which companies do to get appropriate competencies. Now, acting as a con, the results of such research processes for behavioral competencies are less focused on future oriented work and more on seeing and being inevitably backward.

It was during 1996 that FitzGerald and Antonacopoulou gave their report on the task related to competency. Their assumptions were based on the various works that were performed by managers. The aspect that they neglected was the capability of those managers on what they can perform in the near future.

It was during 2000 when Hayes made a note related to competency framework. As per that, there were not many important details as were supposed to be for making a critical assumption on superior performance. Addition to this info, Hayes also reported the fact that there may be chances where one competency set can help in achieving higher performance. However, it is to be remembered that it is not mandatory that the stated competency set can surpass the other competency sets.

It was also seen in the year 2000 that Kandola and Whiddett agreed to the statement given above. Their report stated that those competencies which were laid on the foundation of processes were found to have many flaws. It is for them that perspective on a wider level has to be taken. If such scope of perspective is not encouraged, there are chances that there may be a decline in the utilization of diversity for it. Behavioral changes are also highlighted when the explanation is given in terms of performance management. Such changes are not just because of the presence of other competencies but for other developmental implications too.

Again in the year 1999, Brittain and Ryder represented their report on nearly same type of perspective. As per their suggestion, it is not a constant thing that behavior of a person will remain same. Based on situation and environment, it is possible to witness a contrasting change in the behavioral aspect of a person working in a company.

There are 5intrinsicweaknesses that Taylor and Salaman had brought to light in the year 2002. These weaknesses were focused on the approach of behavioural competency limitation that can be seen in companies via their managers. So, 5 of those are: