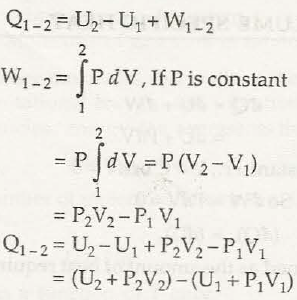 Enthalpy would involve both internal energy that is found in a system and energy which is associated along with displacing the surroundings of system. So, in simple terms it can be said that enthalpy can account to heat flow that can happen within system.

It is found that measuring of internal energy can appear to be inaccurate gauge in case of change in energy. Supposedly, a reaction that comes along with constant volume and no work is performed then it would symbolize as:

In case of open systems, the pressure available in a system and surroundings may remain constant. So, the possible change in volume along with constant pressure and internal energy, then enthalpy is used. Enthalpy can be denoted by equation:

The law of energy conservation, states that the change in any internal energy would be similar to that of the heat transferred.