Now consider the figure below:

Now check out the figure below: 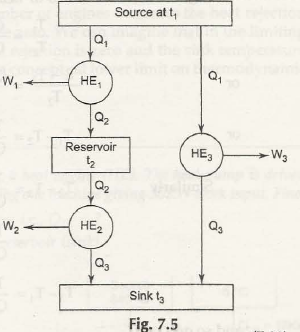 From there you are getting again,

Now t 1, t2, t3 are independent and t3 does not affect the operation of HE1 which is

operating between t1 and t2.

Since ϕ (t) is an arbitrary function, the simplest possible way to define absolute

Kelvin scale and the feature:

This is particularly called Kelvin scale. The independent quality from any substance is its unique feature.

Equation (7.16) shows equal temperature intervals usually steam point and ice point are taken as fixed reference temperatures and the difference between the two is arbitrary taken as 100°C.