Payment arrangements is a controversial issue. But other than that, the number of hours an employee is expected to work and the working pattern of the duration of work is the most important point which needs to be discussed clearly and in great details so that it does not create confusion at the end. Over the last 150 years, the average hours which an employee is expected to be working for,was on the decline, but from the 1990s, there has been a growth in the average work duration. This curve again started falling from 2003. The reason for this change could have been the introduction of new rules and regulations. The working pattern needs to be clearly mentioned in the terms of the agreement. In the 1850s, in UK, an average full time worker was expected to work for 60 hours a week, which reduced over the years. In 2003, it was found men were working for 44 hours a week and for women, it was 39 hours. The working hours have been shown a decline in the current years. Such results could have been achieved due to strict laws. In UK, in 1998, the European Union passed a law to maintain the health conditions of the employees. The legislation of some countries limits the working hours so that unemployment can be reduced. 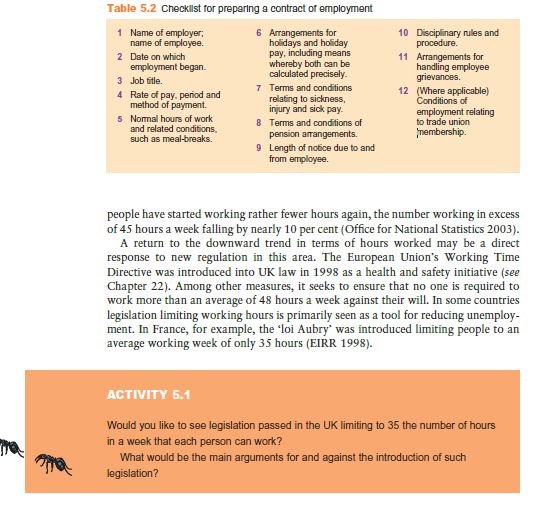 In the last two decades, the trend of working in shifts has become popular. In the sector of manufacturing, this trend is quiet popular because three shifts, each of eight hours allows 24×7 work. The recent trend is a rise in the number of workers in the service-sector, who work in shifts. IDS, in 2000, said that the change has been witnessed because the society now wants to move towards ‘an all-time availability society’, where each sector can be accessed for 24 hours, which has been inspired from globalization, the popularity of e-commerce &the demands of the consumers. A large number of people watch TV and make phone calls early in the morning, and majority of people are late night shoppers. Therefore, there is a need of banks, airports &public houses to operate round the clock. But contrary to manufacturing sector workers, they are not given the additional shift payments for working in unsocial hours.

It requires employees to work a minimum number of hours in each day. It fulfills the need of the employers who are searching for people to provide their services for small periods.

The employees work for full time in permanent night shifts. The major category of people who work in night shifts are security and maintenance staff who are required  to work when the machinery is idle. As they lose touch with the HR, and having continuous night shifts can bring in boredom, therefore motivation and commitment sometimes poses a problem. It is therefore required that people working in night shifts keep themselves motivated.

In this shift, half of the workforce arrive at early morning and work till early afternoon and the second half start their work right from early afternoon till continues it till late at night. Handovers occur in between. Such shifts are commonly found in organizations like hotels and hospitals.

It involves working for two duration of short periods two times in one day. Though the employees work full time, but additionally work in part-time shifts in order to cover the busy schedules. This form of shifting duty is seen in catering business. The drawback of this system of working is the employees need to travel twice from their house to the workplace which results in wastage of time. But if accommodation is provided, this shift is advantageous.

In this method of working, the entire working week can be reduced by providing extension in the period of work in the day such that employees work for the same duration of time but they need to be present at the workplace on less number of days. The day of working is made dense by reducing the duration of the mid-day break.