It is very difficult to take decisions regarding statistical population which should be calculated by taking as base of sample observations. In order to reach at particular decision, we have to make a statement of population which is known by the name as statistical hypothesis.

The hypothesis which is considered for test for possible rejections are subject under the assumption is known by the name as Null Hyphothesis. This null hypothesis is denoted by H0

Then we should move for the next step of setting up of statistic. When we accept or reject hypothesis we do two types of errors which includes

Reject H0 when it is true.

Accept H0 when it is false.

then α and β are referred to as producer’s risk and consumer’s risk respectively.

A region which is corresponding to statistic which leads to rejection of H0 is known as critical region or rejection region.

This is a kind of probability in which random value of the statistic is of critical region. In simple words we can say that it is the main size of the critical region.Level of significance can be taken as 5 % or 1%. I.e. a = P [Type I error].

Separated value of the critical region along with its acceptance region is termed as critical value which is adjusted by looking the alternative hypothesis.

Determination of this test is based on the alternative hypothesis

If all the values are completely specified, then the hypothesis is called simple hypothesis, e.g., µ = µ0 , σ = σ 0 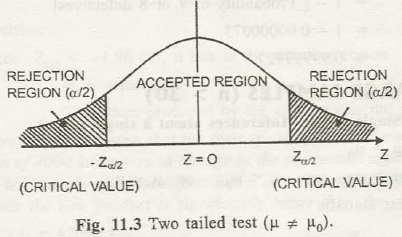 Power function of the test

Accept H0 : If the no. of defectives found in the sample is less than equal to 6.

Here, the no. of defectives in a lot follows binomial distribution with n = 8 and P = 0.1,