Earlier we have discussed ‘production of labor and capital’ by keeping capital as fixed and labor as variable. In this potion the readers will beget to know about two different variable inputs (labor and capital) and its effect on the production. We analyze the changes in the output of the firm because of this new input combination for the production process.

Consider two inputs for the production of certain output say food. A table will be constructed taking labor inputs in each row and capital inputs in column as shown below-

Each entry shows the output which can be achieved every year. After converting the data into graph format, we get an isoquant map which shows the way of representing the amount of output for a particular given amount of input as shown in figure below- 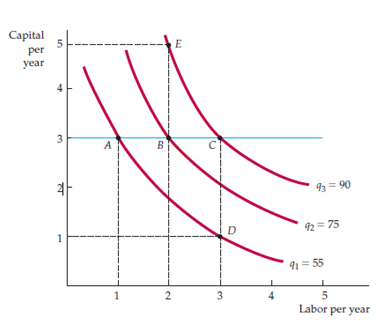 The above Fig. 6.5 shows isoquants map produced by the combination of given inputs using the Table 6.4.This figure shows the output of both can be increased when we move upwards. Moreover, the right side of the figure also shows increase in the output.

Isoquants give complete flexibility of choosing the desired input to get the output as per the requirement. It helps manager to make a decision how to substitute the input for specific output so that the firm can achieve the target at the end of the year without losing its capital.

For example, you might have noticed changes in the fast-food restaurants by looking at recruited older aged people. And with the self-service programs, the shortage of young and low-wage employees can be sorted out without misleading the way of providing food.

Though the organization is working with two variables, the input should be well-balanced or optimized to get the output as per the change in input.

As two inputs are variables, the manager can consider the substitution of one input with another to manage the price flow, keeping output constant. Checking the slope of isoquants tell the story how one quantity is substituted with another one.

Here, MRTS (Marginal Rate of Technical Substitution) will be a factor of concern where one additional unit of work force is considered to be substituted for the same level of capital. 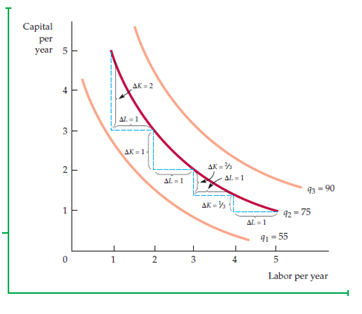 In first case, the inputs ‘labor and capital’ show the perfect substitution for one another as shown in Fig. 6.7- 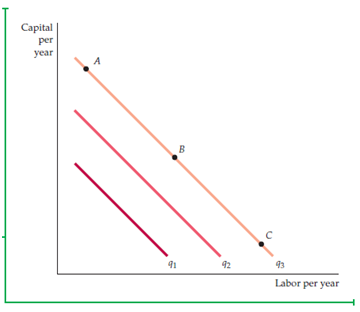 The above figure shows three straight lines of isoquants which specify the rate of return or output is same.

In second case, the Leontief Production Function comes into act because of opposite condition (imperfect combination) as shown in Fig. 6.8- 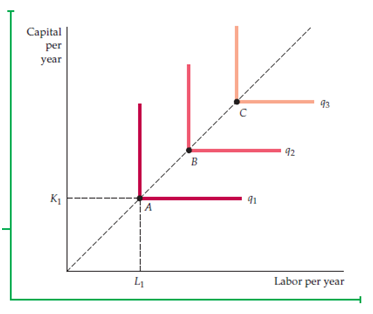 The above figure shows three L-shaped isoquants which specify the indifference in production. So, it is not acceptable in any business organization.

The above analysis shows how the changes in input variables could affect the output or keeping the output same. In case, the manager is willing to increase the output of the firm. Then, to get the production in proportion with the input, we consider three cases-

With the prospect to increase the output to its double figure or more than that, increase get back to scale is considered. It can be seen in large organization where numbers of workers work together. For example, assembly line in automobile industry.

Sometimes it happens that doubling of inputs might not result in doubled output, it comes in decrease returns to scale. It might be the reason of interpersonal relationship between managers and workers that hamper the result. 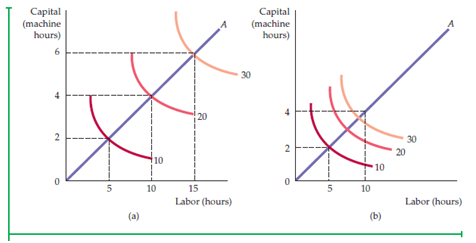