We learned so far that in order to optimize the firm value in future, the owners must introduce the structure at ex-ante outset. Managers must understand that in future, bondholders might want to consider getting a switch to shareholders as they are aware that managers might raise debts to an interesting rate of interest which they might consider weaseling the obligations from the bondholders later on. Why shareholders, if you ask? Well, shareholders share an authority to vote for the managers in the office, which is restricted for bond holders. Under this section, we will learn that managers have an authority from shareholders to expropriate the bondholders in the following ways:

Let us understand how the bondholders can demand high capital cost currently if they get a clue that they might be expropriated in the future.

Risk shifting is a common risk which is generally realized by creditors. So for an instance, we consider table 18.3 stating that capital structure is LD in which managers are allowed to take new projects. Projects with positive NPV will obviously be included in the firm value, but managers accept certain projects with negative NPV as well. We can realize from the table that even after accepting negative NPV, the firm value will be realized to 57.95 from 50$. Under such a scenario, only the creditors are at risk, and other bondholders and shareholders along with managers will be facing better profits.

But this is not the actual problem. The actual issue is raised when managers star earning incentives that might lead to destruction of the value of the firm as they aim on decreasing the liabilities in their near future. So if you say that the corporate must not take either project, then it’s wrong too! Considering an NPV which results in zero pay off, are highly considered in the category of positive NPV which will increase the overall value of the firm. 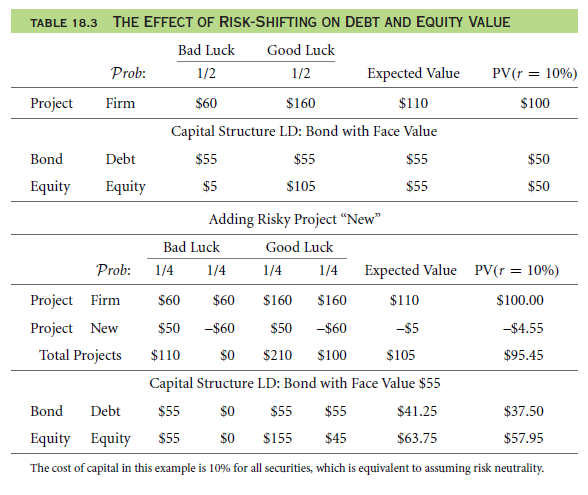 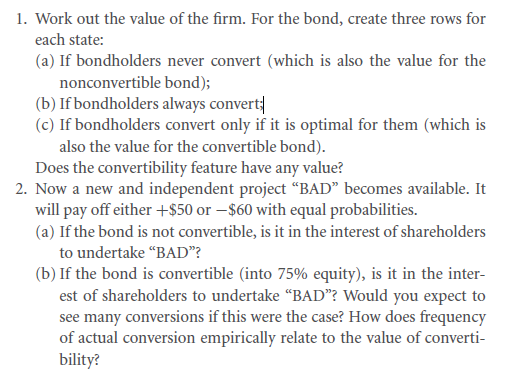 18.5 B Issuance of Bonds of Similar Priority

Other than risk shifting, creditors also face risks with issuing bonds which carries equal or higher priorities. Let’s consider table 18.4 which shows the issuance of another bond with $20 face value carrying the equal priority. Under such a case, when the firm faces bankruptcy, the old bonds will drop down to $5 face value and the new bond will be same as before. So can you consider the same in the interest of the creditor? But the impact of issuing new bonds is not as bad as the risk shifting problem. Why, if you ask? Well it will certainly not destroy the value of the firm but it will force the structure of the capital to some dynamic changes to the firm.

Under such a scenario when the structure of the capital needs to be decided, the firm will have two choices to make from:

Under these situations, the creditors risk can be controlled without being the value of the fir affected and without upsetting shareholders, bond holders and the managers in the firm.

Talking about the bondholders, on the other hand, demands the ex-ante which must be premium. But they might not demand the same if the owner or the firm is not willing to commit the ex-post expropriates. Under such a situation the firm will prevent the debt rising which means they will focus on capital structure development which is titled towards equity. Managers will also not be able to handle the pressure from the bondholders. So, who loses in this situation? It’s the firm!

But in the real world, there are various measures where the firm can avoid bondholder’s fears, which means they can allow the firm to issue debts on the higher rate of interest and thus, lowering the overall capital cost of the firm.

Managerial Risk Aversion: Talking about shareholders which pressurize the managers to increase the risk in project as they are the helping hand to over lay the expenses of bond holders. This is known as counter balance between bondholders and share holders.

And thus, bonds which hold strong covenants have a calling feature that helps the firm to retire the bonds before the maturity signed on the price as agreed.

Corporate Reputation: covenants are known for its inflexible nature which may affect the firm value. And therefore, it is necessary for a firm to develop a less formal reputation that will help them to develop better capital structure and ultimately lesser issuance of debts and better firm value.

Strip financing or Convertible bonds: convertible bonds helps the creditors to take part in the upside direction of the equities. Such a decision is helpful in reducing the risk to expropriation problem by allowing the firm and managers to accept the new projects with positive NPV.

Units: Units are generally the securities combination which will include equity and debt security. Such a scenario will develop NO difference between shareholders and bondholders which will ultimately reduce the expropriation risk further.