Inside Information and Adverse Selection

Inside information in the corporate plays the next significant role in the determination of the structure of the capital. Managers in the firm are typically the most informed people in the company and thus new investors must take care of the fact that they are not getting exploited by them. One can understand the same through an example: So let’s say you are an interested investor who looks for potential in oil well. You want to invest but you are not sure about the quantity of the oil in the well as much as the owner knows. Under such a situation you must try ask the following questions as a regular practice:

This procedural analog is hence directly related to the structure of the capital. Becoming a partner in the mentioned example is a similar case of sharing the equity of the firm.

If you are aware of the quality of the project

Under this case, you will think that project is beneficial, you will expect 110$ payoff from the project. And hence, you will end up giving 50$ in return to the ownership of half of the business. But is the decision rational!

Now think of the scenario as the current owner of the oil well. The owner knows that the project is beneficial and the finance is considered through debt which is 160$ as compared to that of equity financing which is 135$. And hence, the owner will not consider finance through equity if he is a single owner of the good project.

If you think that projects financed through equity are not beneficial

Considering all the good firms, people will notice that they all walk off to the market of debt and it’s only the bad projects which remain untouched.

Equity investors, on the other hand, which are new keeps an assumption that their fresh claims on the project are going to create problems that they not assume the quality of the project if its good or bad. Such a scenario is used as a strategy when the owners of the firm introduce fresh equities which in turn reflect the knowledge that the projects running in the firm are bad.

Such a case will result into selling of equity at a very low figure which is a perfect instance of adverse selection where firms that are scared of the future will ultimately share the perspective. But in the complicated real world, the situation is pretty different. When the owner announces a new equity worth 1$, then value of the old equities is reduced to 10 cents.

And such an argument is not limited to equity but also to other claims too. The trust in the project is automatically affected when the securities are risked to sell rather than keeping the same. There are situations when owners decide not to collateral the loans of the company and therefore make small partners in the company by sharing and monitoring the risky bonds.

Under such situations when junior risky bonds are introduced, it somewhat release the quality of the project which is neither too bad nor too good. Whereas the quality of the project is resulted good when there are new collateralized loans in the company. And hence, the state of pecking order is introduced when the senior securities are offered for sale by managers under the presence of good projects in the firm.

But what do we learn about the capital structure under such a situation? Under such a scenario, the firm which is traded publicly debts on a higher number which are considered failure against the NPV projects which are good and beneficial. 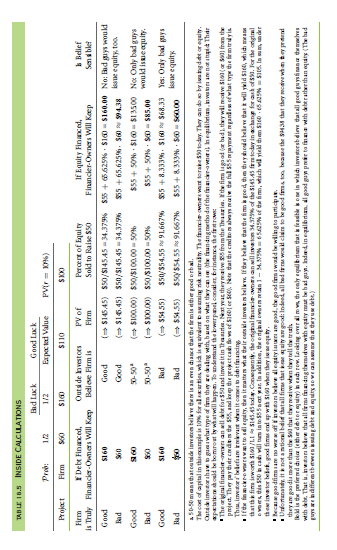 The next question here is: Without being introduced to inside penalties, when can a firm issue equity? It is possible under the mechanism of audit. The insiders, who are knowledgeable about the quality of their project and can convey the same, the results will be convinced in their interest too. In fact, if owners are aware of such a mechanism and still doesn’t take any action on the same: It means that investors who are potential and interested in investing in the firm must know that such a mechanism is not followed by the owner as he/she is aware that the in taking projects are not beneficial, and in fact bad!

But on the other hand, if the owner can convince the potential investors that they have invested their personal capital on the project but cannot do the same anymore, investors are rest assured that there is no internal information about the project which is bad and the owners are genuine potential clients to raise the equities for the firm. Under such cases, investors, external in particular, can be rest assured that the project is not entirely bad and hold a great value with time. As a matter of fact, it has been realized that potential investors do not invest in any of the firm or a start-up company where the personal capital of the firm is not involved.

The theories related to free cash flow and inside information are very closely related. Thinking with the point of former, issuing equity in the firm, it means managers will believe that future is not good. With latter point of view, issuing equity in the firm, the managers will be responsible to ruin the future of the company as they will waste money. But considering any situation, issuing equity in the company means bad future in the signal to the major investors. And hence, the investors will induce the managers of the firm to choose debt than equity. The mentioned theories as discussed, only differ in the explanation where agency explains more casually than the inside information of the firm.