Non-financial and Operational Liabilities and the Marginal Cost of Capital

The liabilities as far as the figure 15.1 is concerned, is thrice its debt. This is something that is extremely common as far as the various US based companies are concerned such as IBM. A question that definitely ought to come up here is whether or not the propositions made by M & M still hold.

To begin with, let us first go back to the proposition made by M & M. The way these visualized the perfect world. The capital cost is without a doubt independent of the manner in which the various projects are financed. Under most circumstances, the task of trading a capital structure that is dumb at an extremely low price becomes exceedingly difficult. In comparison to this, a capital structure that is optimal can be easily sold at extremely high rates. The two major aspect of the perfect market as proposed by M & M that ought to come in handy in this section are as follows:

The assumptions stated above do not hold as far as the liabilities that are not financial are concerned. Listed below are a few instances:

If you follow the propositions that were laid down by M & M, the NPV = 0. However, the credit for trade at an interest rate of 0 % will without a doubt have a positive impact on your NPV. This may in turn encourage the business owner to opt for various other operations. This depends on whether a supplier provides credit for trade or not. This is an extremely vital aspect in the event that a particular individual wants his or her business to thrive. In order to satisfy the various propositions laid down by M & M, individuals might as well propose scenario within the perfect world without he claims that are nonfinancial. This however, isn’t that much important due to the fact that this chapter is mostly concerned about the claims having a financial background. In addition to this the markets that aren’t financial are nowhere close to being perfect. With so many differences between the perfect world and the real world, it is for certain that these propositions won’t be of much of a use. But the fact remains that individuals must without fail look at the claims from a bigger point of view. Another thing that must be taken into account is the fact that the M & M propositions don’t hold for firms with liabilities that are not financial. In the event that the various operation that a firm needs to carry out hasn’t been fixed,

16.6 B THE MARGINAL AND WEIGHTED AVERAGE COSTS OF CAPITAL

All along, we have visualized the world of M & M to be somewhat similar to the perfect world. However, let us now move into the various aspect of the world that was proposed by M & M. The capital cost that is marginal is only applicable to the next $1 that ought to be earned. The Capital cost that is average is considered to be a milestone of the various projects of the firm. This however, is not that relevant but it is in turn considered due to several smaller aspects. However in the world proposed by M & M, both of these costs are considered to be same which further reduces the complexity of the various operation. However, in case of the real world, the two are not the same under most circumstances. Hence, make sure that you have a firm idea regarding both before you actually step into the real world environment.

At first the existing investor of the firm needs to be considered. Once this is done, the WACC must be calculated. Even for a project that is limited to a particular firm, the capital cost to be considered is the average not the marginal cost.

This can further be reduced to:

The idea of the equity or the debt being +ve or –ve projects of NPV is annihilated. Thus in the event that individuals are looking forward to swapping between the weighted equity and debt, they can do so easily as it won’t have any sort of impact as far as the firm value is concerned. If you consider NFLs, you may write the equation as:

Here FL and NFL stand for financial and nonfinancial liabilities respectively. However, the problem with this equation lies in the fact that the NFLS cannot be adjusted as and when required. The risk adjustment factor of capital cost varies greatly as far as the various projects are concerned. As already mentioned, individuals must try and ensure that they clear the taxes by 15th April which is considered to be the tax day all across the globe. There are various financial strategies that a particular firm may opt for. In this case, the best option would be to opt for the source where the marginal cost involved in minimum.

In both the examples, individuals have opted for the NFLs that are cheapest. As a result the manager is greatly dependent of the capital of the perfect world. This in turn is considered to be the marginal cost for your company.

While going through these chapter, one thing must be kept in mind, i.e. M & M usually focuses on the structure of the capital only. There are in no way applicable as far as the real world is concerned. For the propositions to hold, the perfect world needs to be considered. There are the topic that ought to be discussed under the chapters that are to follow.

Some of the major topics to have been covered under the scope of this chapter is as follows:

573 – > board of supervisors, shareholder wealth maximization

575 – > Capital structure that is optimum 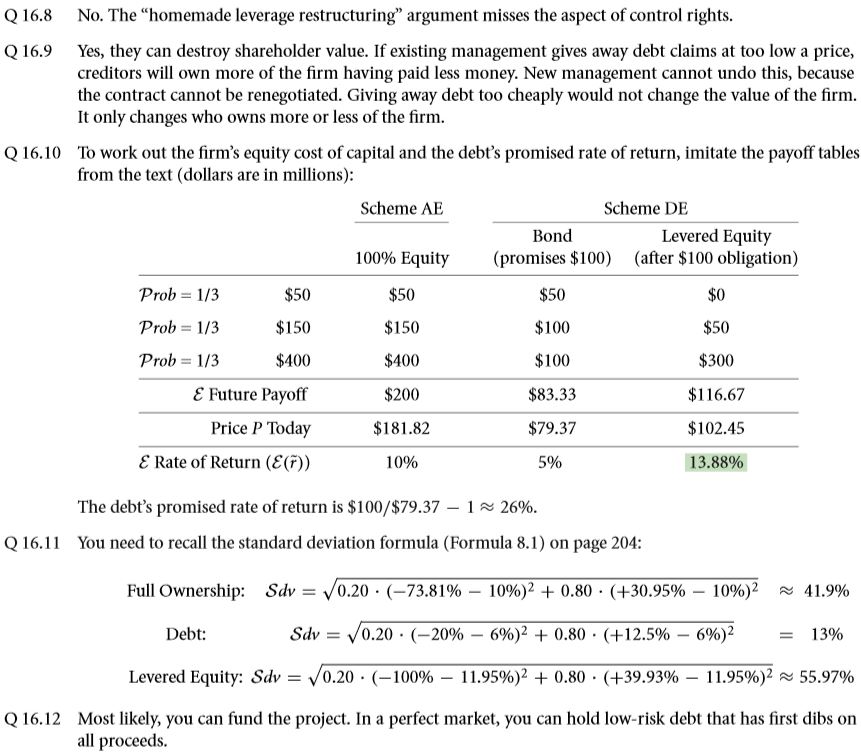 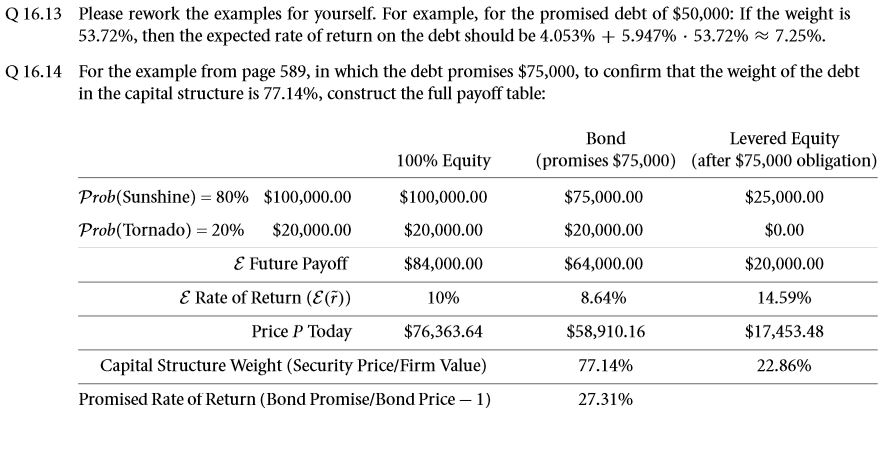 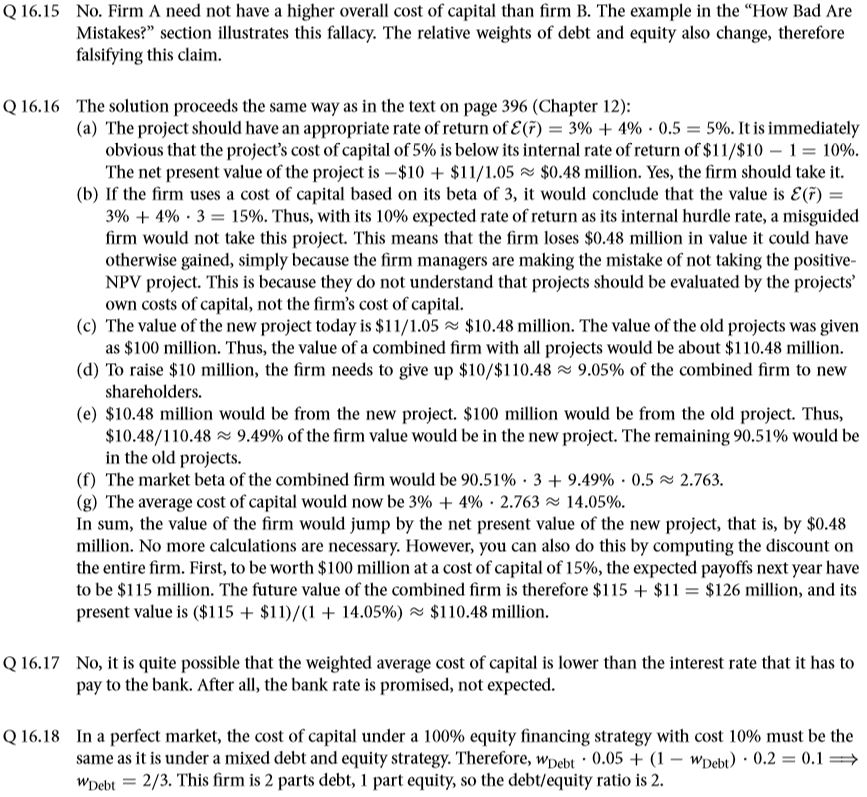 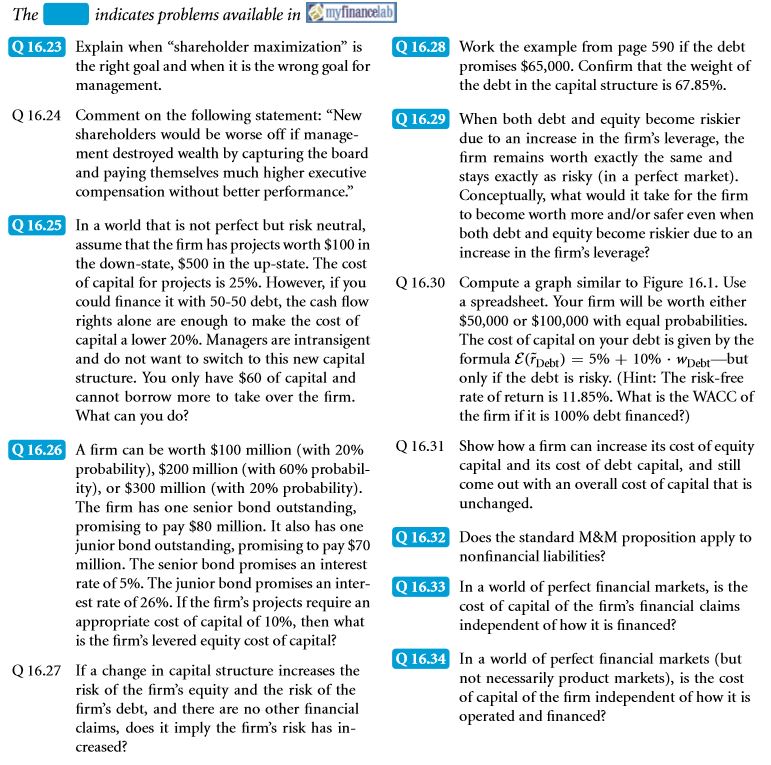