Q 6.20 Consider the example with 5 possibilities and a promised value of $ 45,000 compute the value of the expected pay off.

Q 6.21 If the building value is distributed normally, i.e. there are infinite number of outcomes, plot the graph for the expected vs the promised payoffs.

Q 6.23 Consider the expected payoff for the example with five possibilities to be $ 45,000. Compute the promised payoff.

How Bad Are Mistakes?

Discounting promised cash flows with the promised cost of capital

Two errors cancel out each other. Well, if you are in the field of finance, there’s absolutely no way in which you can have such a mindset. However, if the need to compute the expected value arises, the discount rates and the cash flows can easily be adjusted. The discount rates are used to discount the cash flows as both are synonymous to the same risk. In order to illustrate, let the proper expected return rate be 10%.

A thing about this bond is that the amount put in may not payoff as expected.

Q 6.27 Differentiate between short – standing or during long – standing projects?

Q 6.28 For a project that’s going to take a hundred years, describe the relative significance of cost occurred regarding capital errors and flow of cash.

Q 6.29 For a project that’s going to take 10 years, state the comparative importance of costs incurred due to capital errors and flow of cash?

This particular chapter has covered the major points given below:

Q 6.1 When an untampered die is thrown, the expected outcomes are presumed to be known by all. This phenomenon can almost be regarded as philosophy and is quite ahead of what you know till now and how you answer: a case may occur when the estimated value of a particular input isn’t known. Hence here it can be treated as a variable that is random in a sense. You are however expected to be having an opinion regarding all things hence it may not be regarded as a variable that is random too.

Q 6.2 In the event that you are not aware of the correct bet being placed, it is quite probable that the value expected of you to know will be at large. This is very well exemplified when it comes to dealing in stocks. The return rate is often guessed out there. However in case of a die you must know the physical process taking place to bring about an outcome. Most of the theories of finance assume that you are aware of the expected values. The theories often hope that you have a fairly good idea regarding the values.

Q 6.3 If a particular arbitrary variable represent the number of dots that are present on a die, then the outcome that be expected is

[6 has been taken as the realization value]

Q 6.4 Most of the investors have a certain aversion in placing large bets in correspondence with their health.

Q 6.5 It is often seen solo investors are more averse to risks than those in groups.

Q 6.6 The rate which is expected to be delivered and that which is promised remains constant only for the bonds of the government. There is some default risks associated with all other bonds.

Q 6.7When the probabilities are reversed:

Q 6.8 You will see that statistics have to say that below-grade debtors default way too often and pay up less after defaulting.

Q 6.11 When it comes to the dynamite or dud assignment.

Q 6.12 The partners will have to share the payouts equally and not by the norm that debt comes in the beginning. According to examples in the state of tornado, the 32.74% is going to receive about $6,500 rather than the whole $20,000 that the owner of debt gets.

(a) Repeating the table:

(d) You need to understand that the levered building proprietorship is much riskier than being the owner of full building.

Q 6.17 The presence of many different possible outcomes, the function made for expected payouts would be an evenly increasing function. For all those mathematical geeks: A normal distribution has to have been allowed. The worth of a particular building should not be negative in nature. You will see that the required function increases monotonically in the beginning and eventually becomes an asymptote. 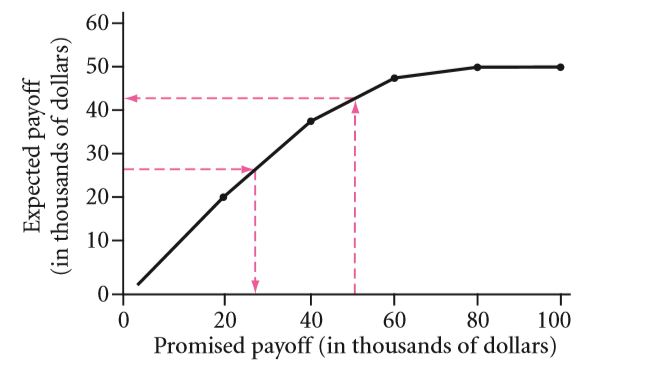 The effects of miscalculations are soundly similar at rates of interest of 10%. Certainly, percent assessment mistakes in the rates are higher if the rate of interest is greater (and lesser if the rate is lower).

Q 6.24 The precise rate of interest actually determines the comparative importance , hence 100 years is so long that charge of principal errors almost assuredly count for any kind of sensible interest rates presently. The errors in flow of cash is still going to matter and even  more when hesitation about forthcoming cash flows rises with the skyline, just as maximum real-world cash flow ambiguity would be.

Q 6.25 The uncertainty of rate of discounts is comparatively more challenging for lasting projects. For temporary projects, the exponents are able to limit the damage incurred.

Q 6.28 Would you say that a single individual be efficiently more, alike, or be less averse to risk than a group of such depositors?

Q 6.29 A particular financial instrument is going to emolument off as follows:

(a) What amount in the present day would mark this as a reasonable enough bet?

(b) What is going to be the full amount that an investor averse to risks will be agreeable to pay off? 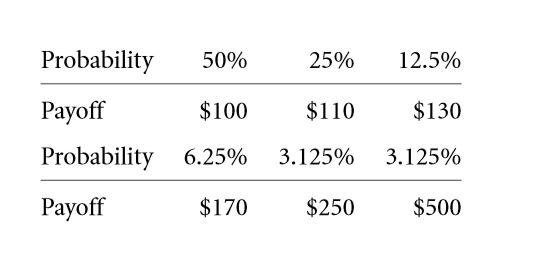