That is a case of wonder that what their managers were doing or thinking while such morally questionable actions and decisions were occurring.

The mangers of a firm can do several things if they actual want to encourage ethical and moral behaviours. They can hire good quality ethical employees, set certain ethical goals and rules of the firm, and follow certain examples and other different things like this. Only be their efforts it will not make a huge difference but if an ethical program is established within the organization it will make a great difference and improve the firm’s ethical climate. But this is potential because there is no guarantee that this ethical program will surely work and give desired results.

Sometimes business ethics program are more than the public relations gestures which does little to influence employees and managers. Let’s take Sears which has a long history for encouraging ethical practices through their various corporate Business Practices and Office of Ethics. But the fact is that its ethical program did not stop managers to collect illegal money from bankrupt charges account holders. It also did not stop routinely deceiving automatic service centre customer into thinking that they needed not necessary repairs.

Enron which is referred as a poster child sometimes for corporate wrong doing has outlined values in the final annual report that many would consider it ethical- respect, communication, integrity & excellence. But still the way the mangers behaved did not reflect such values in anyway. Let us find out some ethical ways through which mangers can start taking a comprehensive ethical program and encourage the whole firm to involve in ethical practices.

Any selection process is an opportunity to assess an individual’s moral side. Through the different interview rounds, backgrounds, tests and others, an employee’s personal values, control locus and ego strength can be checked. However this selective selection process does not always work, sometimes individuals with the questionable standards or ethics may also be hired. This situation can overcome if the other ethical controls are in proper place.

This is why UTC always had 1 that was very much detailed and explicit. The employees know behavioural expectations mostly when it is about the ethics. The Swiss Bank had an explicit the employee code made by CEO that bans the stuffs from helping the client’s cheats on the taxes. But not every organization pursues such explicit moral guidelines.

The uncertainty regarding what is ethical and unethical is a problem for the employees. A formal document of the ethics of the firm and the values and rules of the firm it expects employees for following that, is a famous choice for decreasing the ambiguity. About 97% of companies with an average of more than ten thousand employees have this statement of ethics and values. Smaller organizations also have one such document which they follow. These ethical codes have gain popularity globally. The research made by the Institute for the Global Ethics tells that shared ethics such as fairness, honesty, respect, caring and responsibility are mostly universally embraced. In a survey of enterprises in 22 countries it has been found that seventy eight percentages had formally stated their ethics standard &ethical codes. Also 85% of countries in the world have set their own ethics formally.

What should code of ethics be like? The statement should be such that it brings the spirit of ethical values in the employees mind and encourages them to act in an ethical manner yet it should also allow freedom to judge. See Exhibit 5-7 to have a better view of the categories of organizations’ ethical codes.

But not always these ethical codes work as we expect them to be. A survey on employees in United States have found that forty nine percentage of them had observed both ethical and legal violation in last 12 months which includes things like 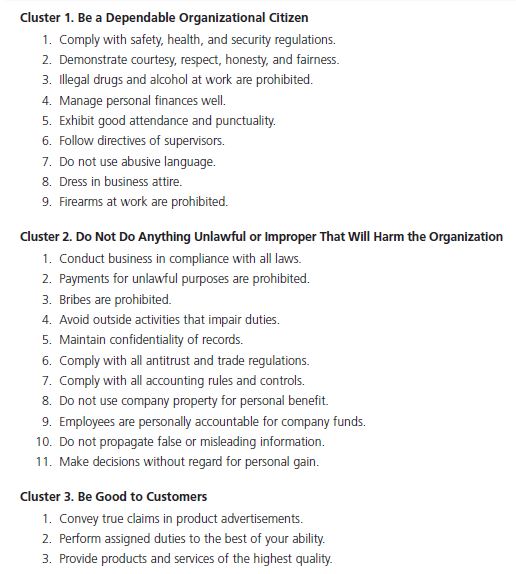 Intimidating behaviour, conflicts of interest, abusive behaviour are also lying to the employees. 37% of them did not report any observed misconduct. What does it mean? Code of ethics shall not be developing? The answer is no. But managers should follow certain suggestions to solve the problem.

Peter Löscher, in 2007 was made the CEO of German company Siemens for cleaning up a universal bribery scandal which cost the organization a record of $1.34 billion fines. To run a business ethically the organizations needs the efforts of all its top managers. Because the mangers are the backbone of the organization and they set cultural tone of the company. They are the role models of every organization and their deeds are much more important than what actually they say. When a manger misuses the resources of a company or lets his friend use company resources or does any misconduct they imply that this behaviour is appropriate for everyone.

The mangers also have to set their ton with the help of reward as well as punishment practices. When they increases the salaries of employees or gives promotions as reward of his ethical behaviour and conduct, the employees feels enthusiastic. So it is very important. But when an employee behaves unethically he should immediately be punished, this creates a sense of fear among the employees and they become bound to act ethically and do their work properly.

In 3 Internal Revenue Service offices employees were found flushing the tax returns and important documents inside the bathroom. When caught they clearly admitted it but gave an interesting answer to what they were doing. The supervisors were pressuring them for completing huge work within a short period of time. They were threatened that if those bunches of tax documents were not processed from their desks soon they will not be promoted and their salaries will be reduced adversely. Frustrated by overwork and few resources they decided the best way to solve the problem is to flush these documents away. Although they all knew that this was completely wrong but this illustrates the powerful affects of unrealistic goals &wrong performance appraisal. Under the pressure off unrealistic goals the employees who are actually ethical feels that they has no other option than doing these unethical works. Also this goal achievement becomes an important thing in performance appraisal. To encourage any ethical behaviour ends & means should evaluate. Just like a manger’s total annual review might include point to point evaluation on how the decisions have measured against company’s code ethics and also how well the goals has met.

Now day’s organizations are creating and conducting more ethical programs, campaigns, workshops, seminars to encourage this type of ethical behaviour. These types of programs have certain controversy whether ethics could be taught or not. Critics are saying that this effort is of no use since ethics comes in individual when they are young. But there are studies which tell that ethics can also be learnt at an older age. There is evidence which shows that ethical training at older age can actually make difference in the behaviours of individual. Ethical training can lead to a vast development of characters, it increases moral development. It also increases ethical awareness within the organization.

How can it be taught? Let us see the example of global defence contractor Lockheed Martin. Its employees take ethical training programs which are delivered through their managers. The focus of this course is its particular case situations. In every department the employees reviews and rates the cases and apply “Ethics Meter”. This ethics meter helps them to set certain ethical goals which are to be followed by the employees. This helps them to follow ethical behaviour and maintain a discipline among the organization. Martin has its own set of ethics codes which the employees use as guidance and it also has ethics officers in different department to guide these employees in case of any ethic dilemma. These codes of ethics have a great impact on the company’s working system because these ethics will finally help each and every employee work accordingly to the rules and achieve good success under the ethical codes.

Here the fear of getting caught helps one to follow ethical rules and behave ethically. Independent audits that evaluate decisions & management conducts in term of company’s code ethics, increases that likelihood. These audits can become regular evaluations and they can happen randomly without any announcement. An ethics program mostly needs both. Auditors should always be responsible towards the organization’s BOD & present their researches straight to the BOD. This arrangement helps the auditors lessens & clouts the opportunity. More and more organizations are accepting these social audits as important programs because of the Sarbanes-Oxley Act that holds corporate business to much more rigorous levels of financial disclosures.

The employees facing ethical dilemmas may need protective mechanisms with which they can conduct good work without any fear of getting reprimand. Every organization should designate some ethical counsellors to help those employees facing ethical dilemmas. Here the advisors should advocate ethical alternatives to the employees. Many companies have appointed ethical officers in different field to make such ethical program and run them.