Fluid can be classified into different categories. Some of the common classification of fluids includes:

Ideal fluids are the imaginary fluid with no viscosity ( = 0) and are also incompressible ( = 0). There is no such fluid which is having zero viscosity as all existing fluids are viscous in nature.

The fluid which obeys Newton’s law of viscosity is known as Newtonian fluid.

According to Newton’s law of viscosity, “Shear stress of all real fluids is directly proportional to the velocity gradient or rate of shear strain.”

Let us consider viscous flow of a fluid over a solid surface with velocities u and (u + du) at two different layers Layer 1 and Layer 2 respectively. The resistance at the solid surface will be zero and it will increase as the depth increases as shown in Fig. 1.2 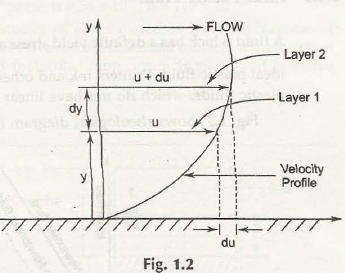 Suppose the fluid is flowing in the direction of positive x and whose velocity profile gives a curve shape.

dy be the distance between these two layers 1 and 2

Shear stress between these two layers can be written as-

S.I. unit of co-efficient of viscosity is Ns/m2

C.G.S unit of viscosity is poise

Water and air are the Newtonian fluids as both these possess some viscosity.

Fluid which has a linear relation of shear stress and velocity gradient along with higher yield value as compare to shear stress is known as ideal plastic fluid.

Classification of fluids is shown in the Fig. 1.3: 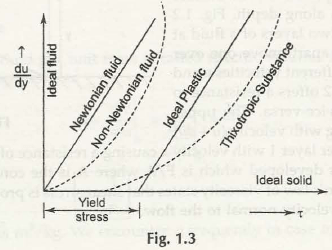 This graph is plotted keeping the shear stress on x-axis and velocity gradient on y-axis.