Our Pro Forma in Hindsight

Let’s now consider the view point as an analyst. Managers can really play their role game by looking on the previous pages of analysis just to play out if they have succeeded to the expectations or not. Whether you were right or wrong about the assumptions and so on and you learn from your own mistakes. If not, you will surely make another mistake in future too! Let’s consider Hindsight: why is the unbiased estimate of pro forma lower than that of original value of market? Were they too pessimistic or optimistic!

Taking an example of a contractor, they are categorized as poor investments in the year 2000. You might consider the same as a correct forecast but the events like September 11, 2001 will prove the prediction wrong. But in general, such forecast does not consider such events as they are unexpected to happen.

Talking another example of PepsiCo when the forecast of the year 2001 were optimistic than that of pro forma. In this case, the presence of autopsy will let you know of the situation or segment which can be wrong further. But in case of pessimistic forecast, the forecast of pro forma is realized as too low. And the major issue here is that one cannot compare the figures and number of the historical numbers to the predicted future numbers. Considering the example of PepsiCo when they sold two major divisions of Frito-Lay! This affected the sales report including COGS which means that the realization was looked from year to year. And therefore, our predictions which are mentioned in table 20.10 is realized to be too low than the actual numbers. 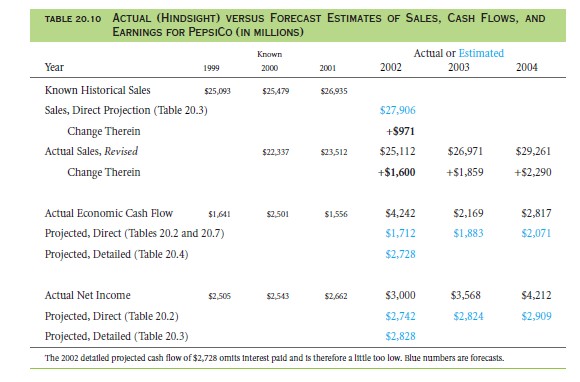 Net Sales: The actual sales report was increased to about $1600 million from the year 2001 to 2002 which is in fact very high than the predicted sales growth of $97 million.

Cash Flows: After selling the division to other subsidiaries, they were able to produce windfall at one time cash which was realized over $4.2 billion in the year 2002. But the prediction was made around $2.7 billion.

And that’s how we can say that our predictions were too pessimistic! The sales were higher, earnings were higher and so were the profits! The reason can find served with inaccurate information and numbers we took in the account. And that’s where it is justified, that internal information is too sensitive and important in order to create a good pro forma. And as an external analyst, you cannot get the access to everything you want!

So consider these examples as exemplar of humility in which you cannot really predict the exact market value of the company as it truly is! Yes, you might say that economic knowledge will help in improving the facts and figures, but not entirely! The uncertainties found in the model are not really discouraging but in fact, one must learn from their bad pro formas and focus on building a better one. You might not be able to forecast well! The only thing that you need to work on is better forecast than the rest of the analyst for a profitable and successful career as a financial analyst.