How is a Decision Made?

Another synonym of manager is decision maker, because almost the entirety of their job description involves making and implementing various decisions. Decisions can be routine, like who to assign the night shift, who gets a bonus etc. or complex, like choosing a new line of suppliers, or undertaking a new project. Decision making encompasses all the fundamental aspects of management, and although almost everyone makes decisions in an office, it’s the manager’s decision that has the most impact. 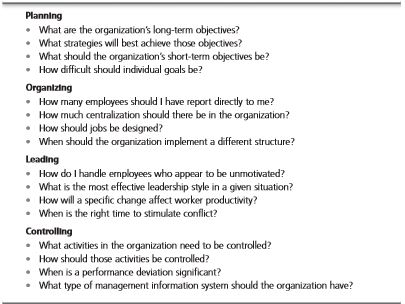 Let us discuss some perspectives commonly prevalent among managers while making any decision.

Rational decision makers depend on logic and consistency to make their decisions. The aim of the implemented decision is to maximize the value.

What does it mean to be a rational decision maker?

Depending on the problem at hand, any rational decision is made based on certain assumptions. These are not very realistic, yet they can be used for small scale simple problems. The assumptions are:

Despite its effectiveness, there have been instances where managers have not shown a rational way of thinking. For example, Carly Fiorina, ex-CEO of HP, shunned criticism and concerns from her subordinates when HP acquired Compaq. A rash decision, which would ultimately cost her the job; she announced the deal without consulting any of the top management. As a result, no research was conducted on the mass perception of Compaq until after the acquisition, which revealed that the users viewed it as an inferior product compact to the high popularity of HP product.

Decisive but prudent action is considered to be one of the desirable qualities top companies seek in managers. Bounded rationality emphasizes on the limits in the required conditions to process the entire information. Managers that are competent use the approaches that are “good enough”. In doing so, they emphasize on their inability to process all information, and factor in variables such as the organization’s culture, power considerations etc. It is a much more logical approach and is being implemented in most organizations. More and more managers are embracing this method as it takes real-life limitations into consideration.

One thing to remember is that every decision has a certain amount of risk. Doubting your own decision will confuse your employees and can be disastrous. So whatever decision you have made, you have to prove your allegiance to it and hope for positive outcomes. Bounded rationality comes with probabilistic outcomes.

A common phenomenon observed which is basically holding on to a decision previously made, despite the chances of it being unviable. Most managers, unwilling to lose standing among peers, escalate their commitment to their previous decisions out of ego and stubbornness. The goal of satisfying instead of maximizing implies that it is not possible to make an informed decision by reviews all possible alternatives, and sometimes, due to difference in worldviews, managers can make the wrong decision. The biggest example of such an instance is the failure to accommodate the changes and the consequent Challenger shuttle disaster.

The role of Intuition: Making Decisions

Intuition is a byproduct of accumulated judgment, experience, and feelings. Most executives depend on their “gut feelings” more than a qualitative analysis while making decisions. The method, if once successful, builds confidence in the manager and ensures the continuity of this implementation technique. 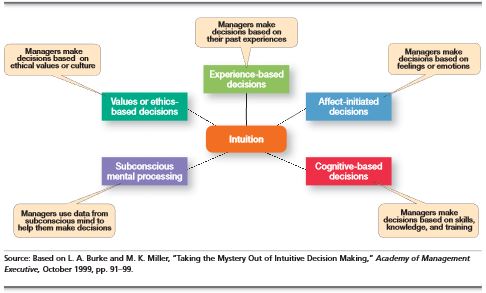 Intuition takes in all the aspects of rationality as well as bounded rationality and improves on them. For example, Todd Moses, founder of Accenture Inc. came up with the idea of PaperPro staplers to overcome the declining market shares. He intuitively decided on this and came on top against his competitors at Swingline, who approached the subject logically.

An experienced manager with similar experiences with a type of problem can interpret and react quickly if it happens again, even if his information is limited. The common stereotype of discarding sentiments while decision making is now considered unprofitable, as managers who understand their feelings during various stages of decisions have a higher rate of success.

Systematic analysis of all available evidence with a goal of maximizing the improvement of management practice is the founding philosophy of evidence based management. Just as you would like your doctor to know everything before diagnosing you when you feel sick; managers have the highest performance when the best evidence is provided to them for their analysis. Commonly known as EBMgt, is focuses on the idea that any process that requires decision making is enhanced by using reliable and relevant evidence, regardless of its importance.

Important elements of EBMgt include:

The dependence and amount of influence by each factor depends on the manager. Some prefer intuition, while other emphasize on ethical obligations, or opinions of stakeholders. Even the same manager can use different elements of EBMgt to reach a decision on different situations. It is paramount that managers recognize and implement the most influencing factor while decision making.