Concept of Bills of Exchange

Though people in business do not like selling their goods on credit, they often need to do so by keeping the high competition of their market in mind. However, selling goods on credit does not mean that this payment of goods is uncertain. A seller needs to keep it in mind that he should ask his purchaser that by when he can expect the payment to be made. In such a case, his buyer may often reply that he needs three to four months of time for making this payment.

Now it depends on this seller if he wants to believe in the words of his purchaser or not. Should he take his purchaser as granted and believe that his buyer will make the payment as promised from before? Well, as far as experience goes, such words have often proved to be false and cheap. It is a universal fact that it is easy and simple to make promises but often proves to be very difficult to abide by it!

In such a case, the best solution open to a seller is to have a written statement regarding the same. Once his debtor agrees, a creditor needs to write a formal instruction to his debtor.This will be for instructing the debtor to make this payment regarding the specified amount of money on the expiry of the specified period. This can be either to him or anyone else as per his instruction and authorization. It is this formal written document which is termed as the “Bills of Exchange.”

As per the Section 5 of the Indian Negotiable Instruments Act of 1881, a bill of exchange of a company is a written instrument with an unconditional order being duly signed by the maker. It is aimed at directing a definite person or company to make payments for a certain amount of money either to or the order of a particular person or to the bearer of that instrument.

A bill of exchange is drawn by a creditor upon his debtor. Through this document, he instructs his debtor to pay a particular amount of money on a claim or after the specified period gets expired. However, it needs to be remembered that unless and until it is accepted by a debtor, it is only a draft. Once it is accepted by the debtor, it is considered as a bill of exchange. Bills of exchange are legally valid documents which even acts as an evidence of debt.

Classifications of Bills of Exchange

There are two categories of Bills of Exchange. These classifications are-

Such bills of exchange are drawn for a certain period. Payments regarding such bills are made after the specified period gets expired in addition to three days of grace period.

Bills at sight are drawn by a creditor on his debtor with a condition that this bill payment will only be made in its presentation. The drawee is liable to make this payment once the bill is presented to him.

Parties involved in the bills of exchange

A bill of exchange involves three parties. These are as follows-

The one who draws a bill is known as its drawer. He is a creditor who has either sold goods or is a lender of financial resources. This drawer is the one who has to realize this payment. While drawing money from a bank, a cheque needs to be drawn. Once the account holder withdraws money from the bank, he is known as the drawer.

An individual or a party who accepts to make this payment, or is responsible for making this payment is known as its drawee. In the case of withdrawing the same from the bank, it is the bank who acts as its drawee. But in the case of bills of exchange, a person who admits to pay this Bill drawn by a creditor is called ‘drawee.’ Once a draft is made regarding the bills of exchange, it becomes valid once it is accepted by the drawee.

The one who receives this payment is known as Payee. It is a drawer who acts as a payee of a bill in bills of exchange. In case the drawer has endorsed it to someone else, the endorsee will act as the payee of this bill of exchange as it is he who realizes the payment. 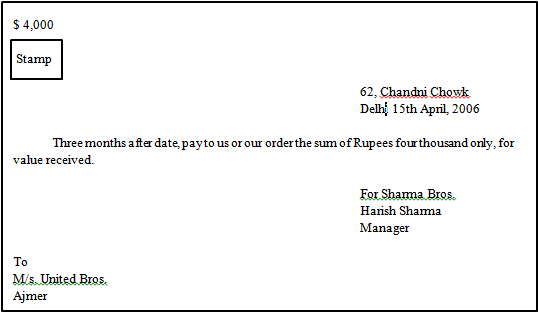 A bill of exchange has several important features. These features are-

The order of payment of bills of exchange is unconditional. It is an instruction made by the drawer, i.e. the creditor to his drawee, i.e. the debtor without having any condition. It acts as a binding upon an accept or of the bill to execute the order.

Since this amount gets matured after the expiry of the certain period, the exact date of payment, i.e. the date of maturity or due date needs to be calculated. For example, if a bill of exchange is drawn on January 1 with a date payable after 3 months from that date, then the date of maturity will be April 4, with 3 grace days included.

Bills of exchanges are unconditional orders of payment with a specific amount. The amount should be specified both in numbers and words. In case if the drawer orders to make a payment of more or less money, it will not be considered as a bill of exchange.

Sample of a bill of exchange

Constituents of the Bills of Exchange

The important elements of bills of exchange are as follows-

The date on which a bill of exchange is drawn should be stated clearly so that the date of maturity can be calculated. It is on this date that the due date is calculated from. Other than the date, even the place of payment should be made specific. It is generally the address of that drawer, as mentioned in the bill of exchange.

The drawer needs to draw the bill as per a definite amount. The amount should be written correctly both in numbers and figures.

The name of the debtor needs to be specified clearly on a bill. Unless and until it is accepted by the drawee, it will not be considered as a valid bill of exchange. Until the time it is accepted, the written instrument is known as a draft. This draft is payable only after a specific time.

A due date is that day when the payment in regard to a bill of exchange needs to be made by its drawee. If defined in simpler terms, it is that day in a year when a bill gets matured for payment.

The terms ‘Value received’ are mentioned on every bill of exchange. This states that a debtor has already received the value of which he has accepted this bill.             These bills are drawn in exchange for some consideration like- exchange of some good for something. Thus, these bills of exchange are drawn on borrowers who have received their value like- assets, goods or cash already from their creditor.

There are several advantages of availing bills of exchange. These are as follows-

The rise of bills of exchange has led to the facilitation of credit purchases. This bill makes a purchaser assure his seller that he will make the necessary payment on the specified date as per the bill.

These bills of exchange are accepted by drawees all over the world. This acceptance is itself a proof that a debtor is indebted and owes the specified amount of money to his creditor. In this way a bill of exchange acts as a proof ofa debt.

Laws throughout the world have accepted bills of exchange as a legal written instrument. Thus, if a debtor fails to pay back the money within his due date, a creditor can easily file a suit against his debtor.

If the drawer himself owes money to some creditor, he can endorse this bill directly in the name of his creditor. This way, a bill of exchange benefits a drawer to repay his debt.

These bills of exchange are a form of credit money. Thus, while fulfilling payments through bills, the money currently in circulation remains unused. Since these bills are easily accepted by traders, it is economical.

Bills of exchange are payable after the specified date gets expired along with a grace period of three days. Since the debtor himself agrees to make his payment on the date of maturity through these bills, there is no need of any reminders for the drawee.

The creditor is assured that he will have the bill payment on the specified date by his debtor. Thus, he can easily make his financial plan accordingly without worrying about any financial crisis.

If a situation arises, where a drawer is in sudden need of funds, he can easily get his bill of exchange discounted with a bank and have his funds much before the date of maturity.

Links of Next Book-Keeping Topics:-