In the traditional or conventional approach of accounting, the rules of ‘Debit and Credit’ were different and accounts were classified in different ways as personal, real and nominal. This classification and rules are discussed below- 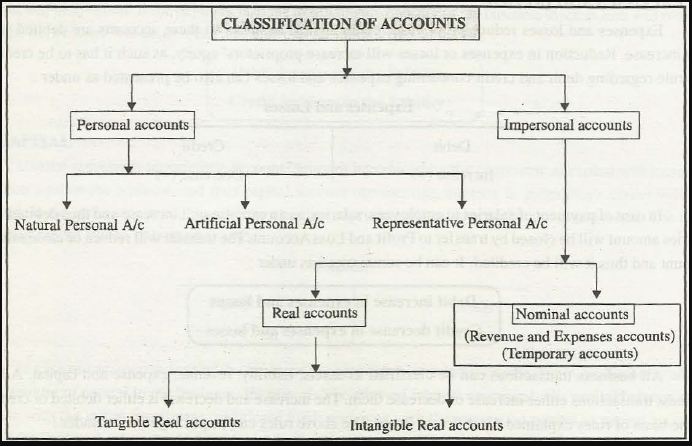 An account can be defined as the presentation of all information related to the financial transactions of an organization. It is always written systematically under one heading for different subheads that highlight the nature of the information.

Rules of Debit and Credit

This suggests that we have to identify whether the personal account is natural or artificial. After proper verification, it will be represented whether it is the giver or receiver.

(Because goods are sold to Kunal)

As per the rule, Kunal’s A/c will be debited and represented as ‘Receiver’.

(Because goods are purchased from Kishore)

As per the rules, Kishore’s A/c will be credited and represented as ‘Giver’

(Because the amount has deposited into bank)

As per the rules, the Bank Ale will be debited and represented as ‘Receiver’

(Because the amount has withdrawn from bank)

As per the rules, the Bank Ale will be credited and represented as ‘Giver’

Moreover, the following rule will be considered in Personal Accounts-

Suppose the Outstanding Salary A/c has been created for paying the salary amount to the employees. This suggested that amount will be paid by the company, so the employees are the creditors and this data will be represented for crediting. Similarly, the Prepaid Expenses represent to pay the amount in advance. So, it is debited and will come under debtor.

(Because the goods are sold to Vijay for cash)

As per the rules of modern approach (American Approach), Vijay’s A/c will not be debited. This is because he has received goods, so he is not the debtor.

(Because goods are purchased from Fernandes for cash)

As per the rules of modern approach, Fernandes’s A/c will not be credited. This is because he has purchased so he is not the creditor.

You should know that if any suffix or prefix such as ‘due’,‘unpaid’,‘outstanding’,‘owing’,unexpired’,‘prepaid’,‘accrued’, unearned, etc. are added to the nominal account, then it will be treated as ‘Personal Account’. For example- unearned rent Ale, Accrued A/c, wages owing A/c and unexpired insurance.

It is related to the property. In other words, real tangible account holds those transactions which are exist in real and can be touched physically. Thus, real accounts include Building A/c, Furniture A/c, Plant A/c, Goods A/c, Cash A/c, Machinery A/c, etc.

These real accounts are called intangible because they do not have any physical shape, size or structure. No one can touch physically. For example, Trademark, Goodwill is considered as intangible real accounts.

Rules of Debit and Credit

Real accounts are for non-living objects or lifeless properties. These items either can be purchased or sold by the business organization. This means either it comes into the business or goes out of the business. In this scenario, the rules of debit and credit will be represented as-

Debit what comes in

Credit what goes out

(Because the furniture is purchased for cash)

As per the rules, furniture A/c will be debited.

(Because this amount has received for the sale of machinery)

The nominal account is just the opposite of real account. These accounts are related to the Gain and Losses or Income and Expenditure or Salaries A/c or Rent A/c or Wages A/c or Interest A/c or Advertisement A/c or Discount A/c, etc.

It is also known as the Revenue and Expenses Account. Nominal Accounts are called as Temporary Account, especially in America. This is because it gets closed after the operations are done accordingly by transferring the data to Profit and Loss A/c.

Rules of Debit and Credit:

According to its nature, nominal accounts have the following rule-

Debit all expenses or losses

Credit all incomes or gains

As per this rule, the wage A/c, Salary A/c, etc. is met when the Commission A/c, interest A/c, etc. are credited. If the payment is done to the workers, then it will be considered as debited. In the same manner, the rent from tenant will be credited as it is again to landlords.

(Because salaries are paid)

As per the rule, salaries A/c will be debited.

(Because the rent is received)

As per the rule, the Cash A/c is credited.

Links of Next Accounting Topics:-