The whole concept of human resource management was associated with a sense of ethics. However, it is important to note that the initial phase of this management process was primarily associated with social justice, on the contrary in the latter phase, it was primarily associated with humane bureaucracy. Though the general practitioners, courtesy to their personal requirements have tried to put this point beneath the requirements, the academicians have tried to put light on this topic.

According to thoughts put forth in the book, ‘The Social Role of Personnel’ (Torringt on 1968, pp. 147–60), the post of personal manager also had an ethical role to play while conducting business. Since this moment there has been a major interest in the development of character via ethical code, and everything works for the general interest of the company rather than certain personal profit.

The basic concept associated with this prospect is that, the whole idea is ‘sold’ over rather than merely sounding like a ‘lucrative’ opportunity. The singular version of ethics represents it as a – the moral value associated with human conduct and ideas that further govern this conduct.

However, the plural format of this includes – a civil, social or religious code of behavior that is associated with a particular profession and should be followed in a correct manner.

Thus, when this is placed on a business platform, ethics can be understood as a format of behavior that should be followed by people who are a part of that business domain, since these norms have a moral authority and following these bring about a certain structure in the working system. In case of a particular business, these rules bring about a proper code of conduct in the working process.

The whole idea of management and ethics had its origin from Victorian philanthropists. However, it was the work, The Gospel of Wealth, by Andrew Carnegie that held forth the concept of corporate social responsibility, which to a great extent is associated with British paternal counterparts.

The whole idea was that a certain part of the society had strength to serve for the other set of the society. This was primarily associated with financial power that a particular party had over other party, who were not financially up to the mark. Carnegie was an influential man, and thus, for him, this whole idea was one-sided and would work in a positive manner in a paternal society.

However, for his opposition – there was a specific contention amongst available corporate resources to ensure that there is no ‘unfair taxation system’ on the whole population.

The 1980’s scenario in business brought back the concept of corporate ethics.

Though this was primarily an American perspective, but it was widely accepted in European contexts. Other aspects as customer’s decisions, their choices, and role of pressure groups came to the forefront.

After a number of associated aspects, it can be found that certain moral values that an individual possesses drive the creation of wealth and prominence was given to ‘value-empty’ concepts of economics.

The need for ethical guidelines

Another very important point to note is how certain ethical decisions are taken as a result of certain personal thoughts and ideas. Though certain actions are not deemed as fit for the world, yet for the persons concerned, there is a personal interpretation and justification of the same.

When it comes to mafia families, they have a particular robust code of conduct that they follow. It is based on that, the various activities as extortion, drug peddling, and prostitution are carried out. Similarly, for Osama Bin Laden, his ideas and activities were based on his personal interpretation of Islam which gives terrorism a legitimate value.

Though in most cases people do not resort to such extremist behavior, however, major responsibility is taken at a different stature. Also, as per latest reports, it is the series of latest incidents that have raised issues as corporate manslaughter to the forefront.

If the supervisor, or driver, or even if the concerned passengers are careless, then whose responsibility is it to ensure that these accidents are prevented. According to Milgram, those people who acted in an extreme manner had their responsibility of certain actions on somebody else, and concept of ‘agentic state’ came to the forefront.

When such corporate responsibility comes to the forefront, it can be found that the value system that is followed by most of the people do not have any connection with the business that is undertaken. Hence, individual opinions are divided in this process to a great extent.

Example: In an abortion clinic, certain doctors and nurses work as well refuse to work. The set that works believes that as a woman, she has the right to decide what she wants, while others who do not work in this clinic are pro-life. Thus, the ideologies are different from the same perspective and accordingly determine the actions.

In certain cases, the standards of ethics are determined via a coded group. When all the members of that group follow a rule jointly, that can be said to be a common idea of ethics. So, in case any joint plan has to be developed, the concerned parties have to agree to that,and only then the final plan can be developed.

On a regular basis, individuals face certain moral dilemmas, and it can be found that certain management level authorities have a huge problem in regards to HR managing the conduct of people associated with a particular organization. In case of unpopular management, they seem to be in a situation wherein they have to justify their work in such a framework. 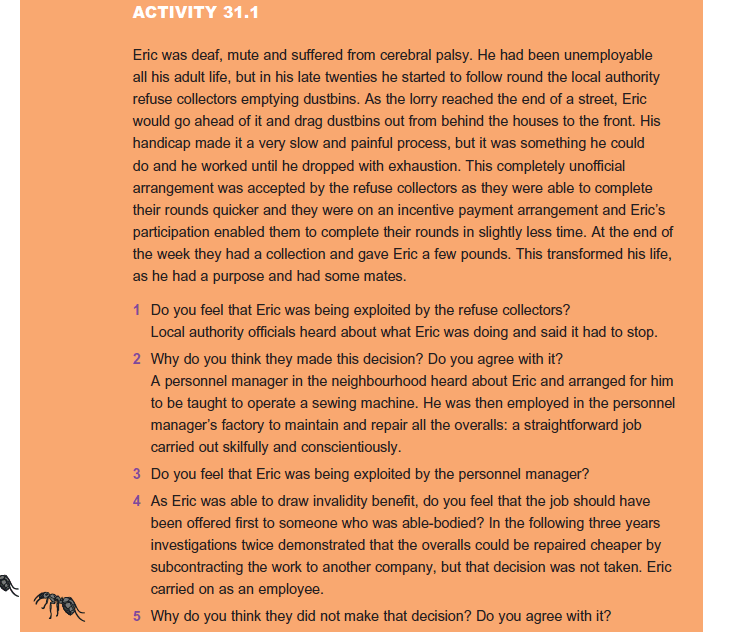 During the early 1990’s most of the organizations in Britain had a set of formalized ethical code of conduct. The most important point is, these are no set of rules that are associated with an individual’s working process.

Rather, they can be seen as a set of guidelines for the better working process of the concerned parties. It is to be respected and understood for developing the best features. Getting people to follow the code of conduct is a tricky situation since they cannot be coaxed and there will always remain a group of people who are not ready to comply with these ideas.